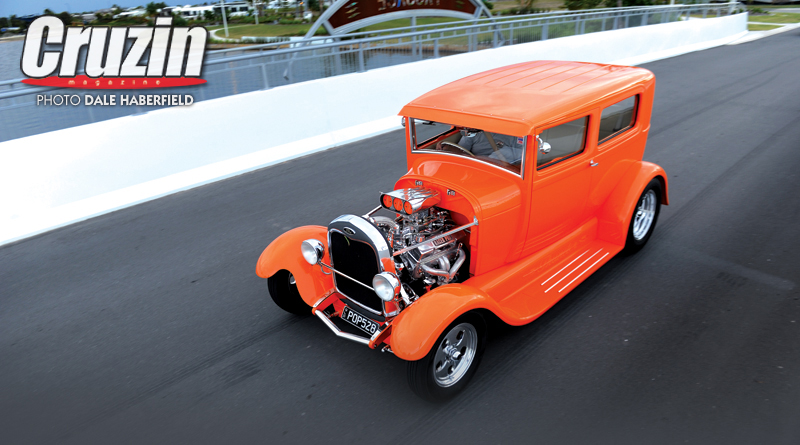 Stress can be alleviated in many methods. For long serving Fire Service Commander Inspector Lloyd Johnston, piecing together a drag strip inspired hot rod for the street was his prescription for the diagnosed symptom.

Well before Lloyd carved his 33-year career in the high demanding position within the Fire Service, he had earned his stripes as a motor mechanic and honed his automotive skills at the Surfers Paradise Dragstrip. “Back in the 70s my mate Don Garvin and I got together and had some fun on the strip with an old FJ. At the time we were running a blown 392 Hemi with six down draft Strombergs,” he explains.

After campaigning the healthy humpy throughout the glory days at Surfers, Lloyd crewed for other racers before another stint of racing, this time behind the wheel of a six cylinder Holden-powered Toyota. Lloyd was having fun. Truck driving was his next commitment in return for a full time pay cheque, until the fire service replaced time on the road and Lloyd’s future was changed forever. 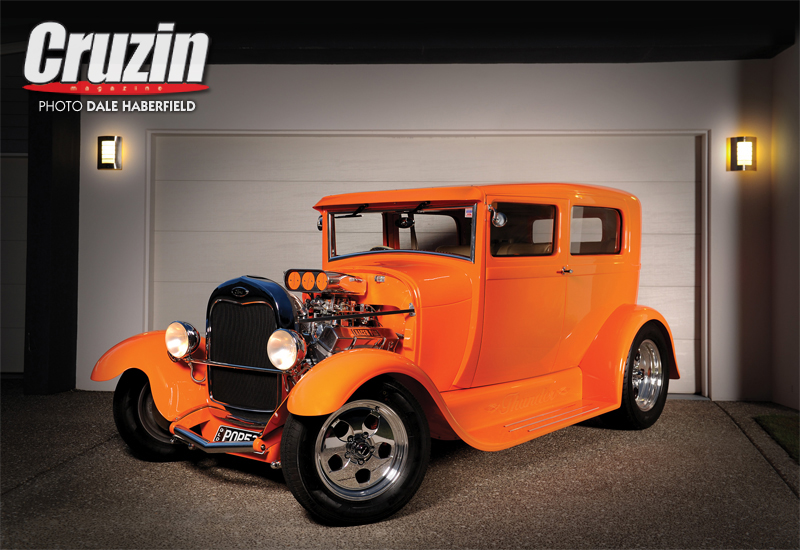 Fast-forward to 2010 and decades of immense responsibility and constant training was exhausting his personal commitment, compelling Lloyd to seek a release. Smacking white moon cratered balls around a perfectly manicured lawn may work for some, but not our seasoned quarter mile contender. Lloyd’s answer was to build the hot rod he never finished.

“I had started previous rodding projects, but I never completed them before they were sold,” he confesses. This time around he was going to see it to the end! Honouring his unfinished 1928 Ford tourer, Lloyd hit the interweb in search of a compatible match. After much research, Lloyd targeted one of Dennis Stockman’s same year two door sedan creations as the preferred starting point. Established in the outskirts of Tamworth, the Stockman Fabrications-bodied reproduction Fords have earned their fair share of street cred amongst rodders. 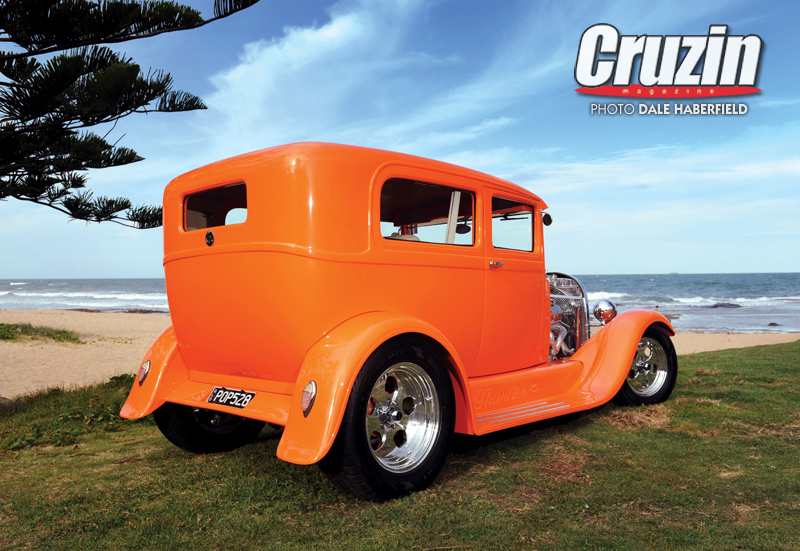 The Model A repop with its chopped roof and high quality finish accompanied with a purpose built rolling chassis, provided Lloyd with a perfect platform to dial in his own personality without reinventing the proverbial wheel. “I spent three months researching what I wanted, I talked to a lot of people and the feedback was favourable,” he says.

With project in hand… or shed in this case, Lloyd was soon forgetting the previous days dilemma’s and concentrating on a suitable engine to propel his modern day Model A, settling for a tried and true Chevy  V8 with ample cubes. “It was my son Ty’s fault,” he remarks about the healthy small block, “he designed all the technical specs and I paid to have them done!” 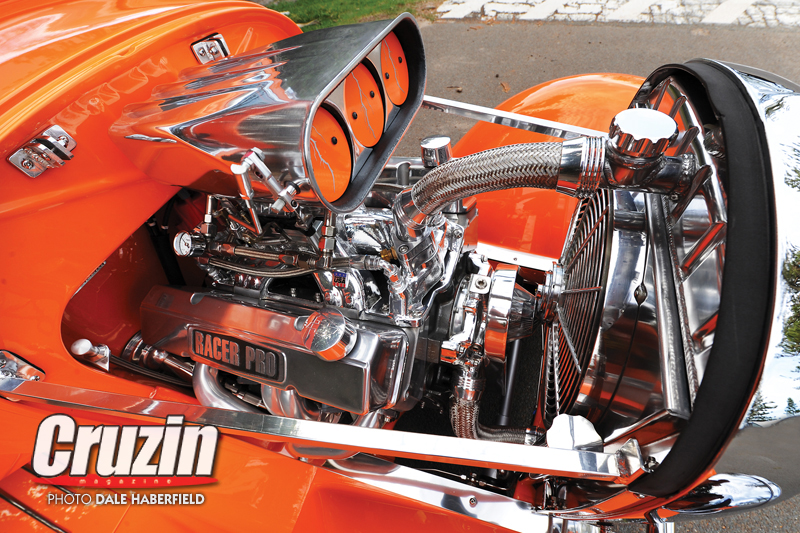 Currently holding down a steady job as Auto Leaders service manager, Lloyd proudly boasts that his talented son can work on anything from lawn mowers to bull dozers. While Ty blueprinted the Chevy’s vital internals, it was Lloyd that surgically enhanced the mighty mouse mill to 383ci, pumping out around 600 horses, very worthy for an old racer with a lazy foot.

With all that power, first order of business was to ensure that the Stockman chassis was up to the task. The boxed and stepped reproduction Model A rails feature a RodTech independent front suspension for superior ride control combined with coilover springs at both ends. Out back a Ford nine-inch pumpkin is filled with 31 spline Currie axles and a TruTrac 3.55:1 centre, all located via parrarell four bars. 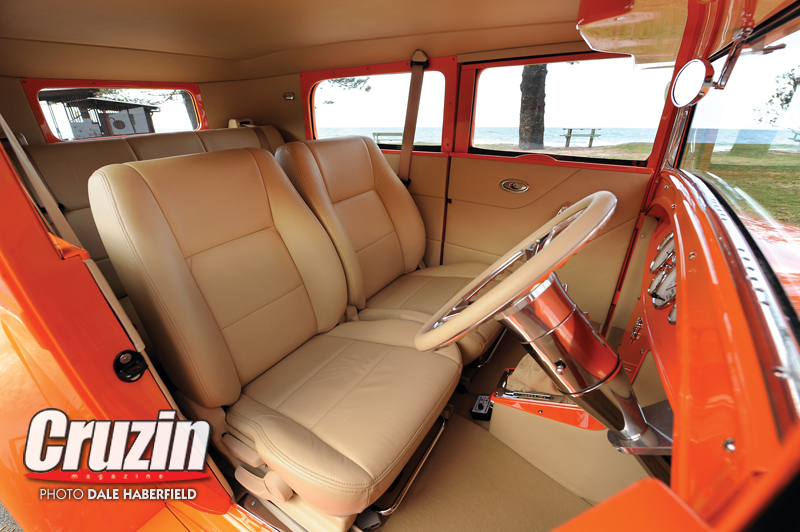 Thanks to a clever electric vacuum pump, a quartet of rotating discs of both Ford and Holden origins outfitted with accompanying binders control braking duties with ease. “I was having some issues with the boosted brakes due to a massive case of mumps on the cam,” Lloyd confesses, “so I researched what electric cars use for a vacuum source and applied it to my situation. It works perfectly and I have a litre of air up my sleeve contained in a reserve tank just in case.”

Keeping every nut and bolt visually spectacular throughout the majority of the undercarriage are hand machined covers that Lloyd crafted from his lathe equipped garage. Creating all of those metallic jewels may equate to many, many hours whittling billet alloy, but just consider the savings on therapy!

Before the chopped Model A was reunited with its impressive foundation, Lloyd tweaked the rear guards by adding a further 25mm to their width and pushed the radiator forward a similar distance. With modifications kept to a minimum, exterior dress up was handed over to Pro Paints at Maroochydore who finessed the fibreglass Tudor before coating the entire ensemble in PPG Chilean Fire, and in case you happen to miss this eye popping tint, gold flake was added into the final coats. 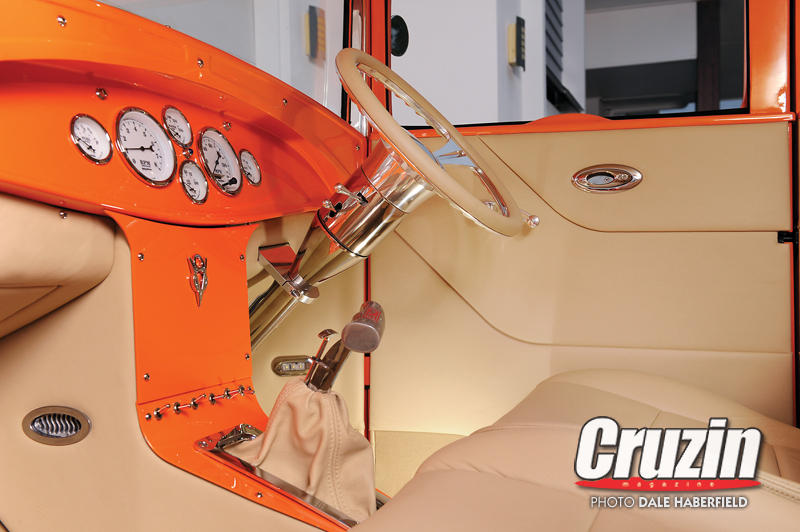 To keep up with the intense exterior bling, Lloyd chose an uncommon set of Centerline hoops measuring 15 x4.5 inches under the chromed A bone grill shell, and 17×8.5 inches nestled beneath widened rear fenders. Imported by Rocket Industries for Lloyd, he is happy that their distinctive style is not generic on the street. Nankang rubber does its best to contain wheel spin at full noise.

Keeping the peace until he does mash the go pedal is a homemade 2-½ twin system exhaust bolted to a pair of Sanderson block hugger headers. Once the completed pipe work was welded, the entire package was treated to a liberal smothering by Jet Hot Coatings.

“It was supposed to be just a driver but the better looking they get… the more you spend,” Lloyd chuckles.

This applies to the inside of the ’28 as well, as no expense was spared on creature comforts for this back street bruiser. Inspired by Brenda’s (Lloyd’s wife) previous grocery getter Suzuki Swift (‘inspirational’ may be a stretch…), Lloyd found that the Asian import was the perfect donor for seating. “I purchased a complete interior for about $350,” he laughs. With the seats stripped of their former covers, Lloyd could install the complete front buckets without alteration utilising their original slide      mechanisms and forward tilt feature. Once the back seat was trimmed to fit, Lloyd enlisted the expertise of Brendan Watts at Gadenne’s Motor Trimmers to stitch the tasteful and unfussy interior. The all cream leather palate is reminiscent of European luxury, culminating with Mercedes carpet underfoot. 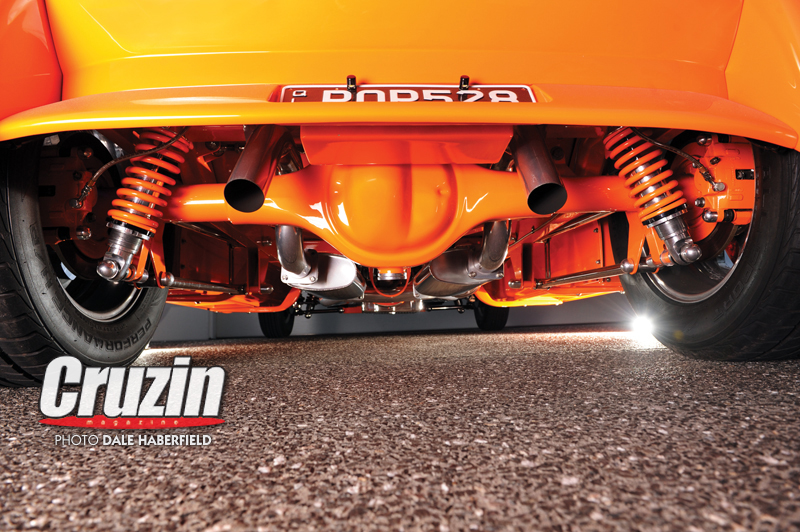 Dissecting the muted hue is an owner made centre console that not only allows the admiring eye a colour break, but also houses a host of internal electrical components including the battery. “I bought the battery first and that dictated the console size,” Lloyd explains. It also houses the B&M shifter that connects to the Turbo 700 auto, prepped by All Trans on the Gold Coast with a Convertor Shop 4000 stall and lockup control.

Nearing completion of his endeavour, Lloyd felt that his project required a name of significance. Thunder was chosen in honour of his youngest grandson, Coen, as the indigenous meaning of his name is ‘thunder’, and the fact that he was born in a thunderstorm. It also signifies to the neighbourhood that Lloyd is out for another cruise in the pursuit of stress relief.

Lloyd would like to thank his minister of finance, wife Brenda and a huge thank you to son Ty. Since completion, Thunder has been awarded back to back Top Tudor accolades at the Queensland Hot Rod Show 2014/15, featured as a Meguiars Superstar in 2014 and picked up People’s Choice locally. A fine achievement for a hot rod that was completely built in the family home garage: sans upholstery and paint. Even better when you consider, it’s driven regularly. 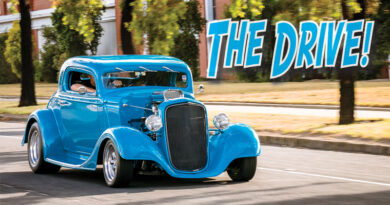 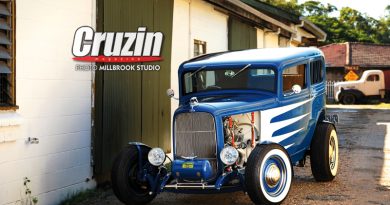 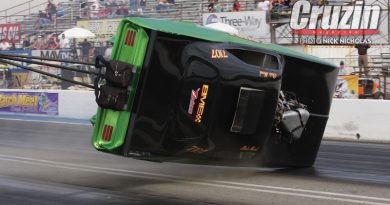