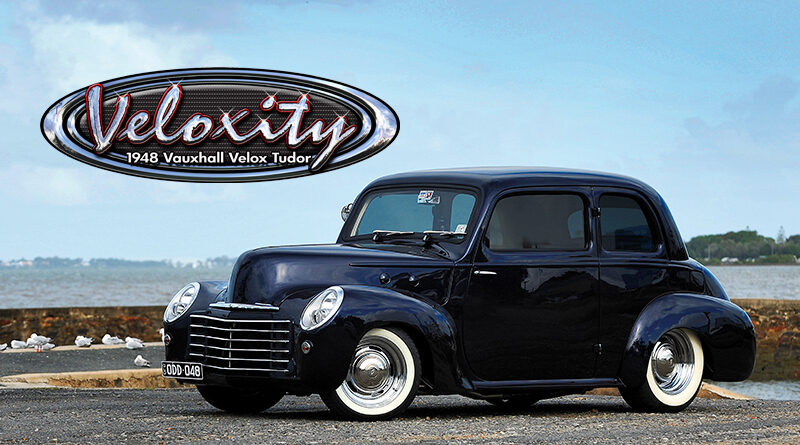 The coined term “Dare to be Different” is frequently used these days, almost to a point of diluting the meaning. Like a guy painting his ’32 Ford not red or black, or “WOW, it’s a Ford-in-a-Ford…”. Daring stuff indeed. But for Jamie Craig, he’s the real deal. How many other hot rod Vauxhall’s have you seen lately with attention to detail second to none?

Growing up in a family passionate for all things automotive, Jamie enjoyed watching his brothers follow their father’s footsteps in mastering the quarter mile. “Dad had a front engine slingshot he used to run at Surfers Paradise in the 60’s and 70’s, it was called Purple Haze,” Jamie proudly stating. “My brother Alan was last year’s nationals winner (ANDRA Modified Eliminator Class) with his 400 small block altered,” he continued.

Spending most of his time around hot rods and drag cars, Jamie enjoyed the modified car movement with his own street machine and other fast cars. Self-confessed hot rod spectator for too long, it was time to become a participant. Years of watching other people revel in their rides provided Jamie with a clear vision of the desired look for his first rod. “I wanted old school tuff,” he stated but firstly he needed to decide what was going to become the canvas for his masterpiece!

In Jamie’s mind anyone can build one of the many popular body styles that is available in the wonderful world of reproduction and turn out a winner. He mulled over a ‘32 Ford and a ‘41 Willys for a while but nothing was striking the right cords. Real steel was still preferred and the need to create something different remained the prime objective. After several trips past an old guys place with a rusting hulk in his yard during February 2000, Jamie decided to take a closer look. With its gaping bonnet propped skyward and a for sale sign protruding through the engine compartment like a stake through the heart, her body was in better shape than first thought. The obligatory surface rust had devoured the original duco and rust was attacking the boot floor but the majority of the shell was sound and in good nick. A short negotiation of price ensued and a deal was struck, Jamie had bought himself a Vauxhall Velox… along with years of hard yakka.

Once home, work started on the new project as soon as it rolled off the trailer. In a Queenslander-style work space, ie. under the house, dismantling was the first order of progression. Entertaining visions of knocking this car out in a nine month time frame on a modest budget, Jamie with help from his dad, plunged headfirst into the build. “I’ve  got photos of my dad cutting the firewall out of it with a nine inch grinder while the body was perched up on besser blocks with a piece of wood between them,” he laughs.

Now for any accomplished hot rodder we have all been smashed by one or two, but for a first timer Jamie was blindsided to say the least. Eleven years later and a tad over 100 grand, the job was completed. Ok I can see I have your undivided attention now so lets take a huge step backwards and see where the time and funds were invested.

Sticking true to his original concept, the little Vauxhall has undergone a mountain of body and chassis redesign. From the eye level of a Chihuahua everything is brand new… er… old! For a box of beer Jamie started with a rolling 1947 Chevy Fleetmaster chassis. Not a match made in heaven by a long shot but with help from brother Alan and his dad, work commenced on the garage floor. After months of cutting, grinding, pinching and welding, things were taking shape.

Mate Jim Peel massaged a Mitsubishi L300 between the front rails and GJ Sigma triangulated radius rods for the shortened Centura third member in the rear. A new crossmember up front shares duty with a custom built K member to strengthen the shrunken Chevy platform. Such strong underpinnings were never intended to be home for a four pot blow hard. Keeping it all GM, a 350 crate engine dressed with a bowtie was the clear choice for motivation. It’s packed with all the good bits including four bolt mains and a steel crank for a tough bottom end underneath a bounty of go fast Edelbrock parts up top. Plenty of sparkle and polish greet you when popping the hood with a Mooneyes finned air-cleaner rounding out an abundance of eye candy. Behind the ultra reliable mill a rebuilt GM TH400 completes the tried and true package.

After what felt like an eternity to achieve the solid base for the body work to begin, the surface had barely been scratched. Only one panel of the original car remains untouched throughout the transformation. One of the main alterations and possibly the most overlooked is the conversion from four door sedan to a tudor. Most people just don’t know enough about these little cars to be familiar with what body styles were available. Former TAFF teacher Bruce Sorenson from West Ipswich was entrusted for this major undertaking with sensational results. Unfortunately Bruce was diagnosed with cancer during this element of the build but was adamant he would finish his part if it was the last thing he did. Bruce fulfilled his goal but sadly is no longer with us, however his workmanship will forever live on through achievements like the Vauxhall.

With only partial bodywork completed and a head full of ideas Jamie turned to long time friends Graeme and Trish Palmer of Oz Rods for help to steer the project throughout its journey. A big portion of the little pommy’s unique personality is undeniably due to the installation of 2004 Mini Cooper headlights. After borrowing one from his wife’s car “just to see if it would fit” it was a done deal. Discussing the idea with Graeme resulted in the purchase of a brand new Mini bonnet providing the necessary headlight buckets to integrate with the Vauxhall guards. Money well spent. Headlights were liberated from a shorter than normal Mini from the local wreckers.

With so many other modifications applied to the body this could be a very long story so I’ll just give you the skinny on some – one piece walk-off front sheet metal, smoothed one piece bonnet with FJ port holes, suicide tudor doors, rolled front and rear pans, all guards re-radiused, all new floors, custom inner guards, tubbed rear, 1955 Chevy front indicators, frenched rear Commodore indicators, 1948 Chevy tail lights, recessed rear plate and channelled three inches. Whew!

After the enormous amount of body work was completed to showroom level the daunting colour choice was next. Early contemplation was a primered finish retaining the old school theme that was quickly redirected by Graeme (in his own words R.U.F.Mad?), who felt the workmanship deserved better. The decision seems so obviously correct now! It’s experienced guidance like this that can make a good car, great. Still the colour palette was blank. Gun painter Glen Enticknap was entrusted with the selected hue from the Lexus range, Black Sapphire. Unfortunately during the multi layered paint process the wrong base was used and Glen had to make that phone call we all dread and explain the mistake. After inspecting the error (keeping in mind the entire car was in final finish) Jamie’s words were “don’t change a thing, it’s beautiful”. Even today when parked near a car wearing the factory colour he’s over the moon that Lady Luck was on their side. Funny how these things turn out.

Without wheels, cruising the blacktop would be naught. Not surprising we find more Chevy parts with chromed Rally wheels at all four corners capped with bowtie moons. BF Goodrich with white walls from Antique Tyres continue the nostalgic flavour.

Inspired by builders like Chip Foose where modifications are subtle and seamless, not glaringly obvious or for shock value, and motivated by passion, his ambitious project to stand out in a crowd has been achieved and well received. This car exists to be driven. That doesn’t mean car shows are taboo and picking up silverware at a regular rate is something Jamie is very proud of. And so he should be. Well done. 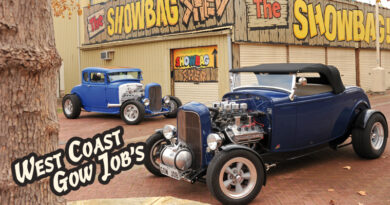 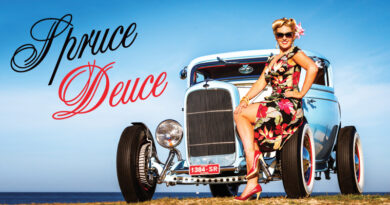 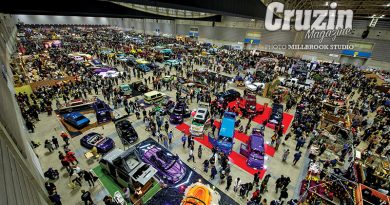