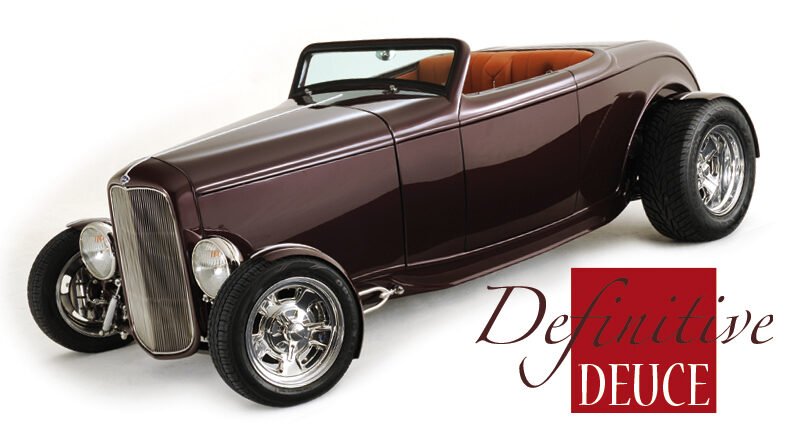 After 40 years as a member of the Cheaters Street Rod Club and a string of show winning rods in his wake, Wally Deskins has been there and done most!  When the day came for Wally to build his final, personal hot rod you just knew it was going to be something special. With help from his son Michael, together they created a 1932 roadster like no other. A Definitive Deuce for the ages that not even its creator could retain.

Back in the early 70s, Wally’s thirst for visiting the birthplace of hot rodding and his own, the USA, was almost unquenchable. Born in the state of West Virginia, Wally moved to Australia at the innocent age of just one year old. Dad was serving Uncle Sam and was called to duty to a place called Queensland. Wally has called it home ever since.

In 1970 the 1st Annual Rod & Custom Street Rod Nationals debuted in Peoria, Illinois with 1,200 participants and nearly 600 pre-’49 street rods. Conceived by fishing buddies Tom Melody and Tex Smith and implemented with the likes of Bud Bryan and Jim “Jake” Jacobs ( Pete & Jakes fame), Peoria was the chosen location because it was considered almost the centre of the United States population at the time. The average cost of a new home was $26,000, regular gas was 36 cents a gallon and history was made.

With the hype of the biggest street rod gathering in the world reaching Australian shores through magazines and selected media, he made an oath to attend the party sometime in the future and catch up with family in the process. It may have taken six years after that inaugural and historic event but he hasn’t missed one in over three decades. To say that those annual visits to the motherland of rodding had an influential effect on the future of Wally’s cars would be a huge understatement. From his first ’31 Ford roadster on deuce rails he has enjoyed owning and building around 20 rods during his long tenure in the sport. Highlights of his dedication for detail was well illustrated with his black and beautiful ’31 two door tourer and ’31 Victoria, both winning top honours on the Australian show circuit in their prime. Paying close study to styling and techniques during those trips overseas has certainly paid dividends when applied to his own rides.

After building an untold amount of rolling chassis’ for other people in his own garage and fuelled by the constant call to include a body package, he opened the doors to C&W Components in 2002. During the following years both sons, Michael and Todd, have been welcomed into the family owned business helping it to become a leader in full composite hot rod bodies which Wally believes is the future for the industry.

As we all know any good hot rod shop benefits from a calling card that you can drive and Wally decided to build a knockout rod that was outside the square. He ordered a 1937 Wildrod body from the States and set it with on a frame with Jag rear suspension and big dollar wheels. As the build progressed, numerous calls to duplicate the body style had Wally contemplating the exercise, providing the amount of changes necessitated by law were adhered to.  After a long hard look at the direction he was headed with the Wildrod and the enthusiastic interest shown by elite car builder Peter Elliot to own the ’37, he sold the unfinished project and invested to money into his own unique ’32.

“I thought we could build something just as attractive and show off our own home-grown product,” he said in his signature dry tone.

With the shop filled to the gills with customer orders and Michael hell bent on perfecting the composite construction process, the ‘32 was only worked on for two weeks at a time over the Christmas break…for 3 years. “That’s why it took so long,” Wally adds, “we were supposed to be on holidays.” During the fourth year though, things became a bit more serious.

Now this isn’t your belly button deuce roadster, the entire design was planned from the outset. Achieving the stretched wedge appearance was always Wally’s main goal, providing everything was in the correct proportion with each other. Every panel is modified and the only piece in its original place is the cowl. “We started with a cartoon drawing, photocopied it and stuck it inside the car for reference,” remarks Michael.

When it comes to deuce roadsters, one could be forgiven for asking “What hasn’t been done before?” Wally just saw this as a challenge and backed their skills 100%. Looking over the bodylines, you know its different, but even the most ardent deuce fan would be hard pressed to label every alteration. The list of modifications performed is literally massive. I’ll only give you the highlights here and if you crave for the full story, don’t hesitate to give Wally a call.

The overall length of the body is 6” longer than stock and 2” taller in the rear quarter panels. The rear wheel arches are modified to achieve a proportionate amount of material between the arch and the body swage, and the doors have been lengthened by 3” and widened 50mm to accept the electrically operated glass windows. The boot lid has grown and extra 2” on the bottom edge and the beaver panel is also lengthened. For every action there is a reaction so you can only imagine how much work was required to magically combine all of these changes seamlessly without a wand.

A huge portion of the car’s appearance is the windscreen. Rather than bolt a Duvall style frame to the cowl they chose to use a ’32 five window version for its individual looks and point of difference. Having such reproduction items already in your arsenal makes life a little easier and they proceeded to cut one into four pieces to make it fit its new location. Underneath the glass skin is a full steel structure for added strength akin to those of the very rare cabriolet. The cowl swage is as per original ‘32 but the windscreen has been laid back for visual effect.

Moving forward, the stretched three piece bonnet is all hand rolled steel, massaged by Wally himself, and can be opened from either side of the car. Paying homage to the original lines of the ’32, a hand formed centre strip was made from brass to continue the revered jewellery of the iconic ‘one-year’ grill shell that’s been lowered between the rails. Wally revealed that the body mods alone consumed over 1,000 hours of labour.

Underneath all of that amazing wizardry lies a C&W fabricated chassis that was also subjected to its fair share of neat tricks. To achieve that sweet stance, the front rails are stepped 3” and pinched for better alignment inside the grille whilst concealing the bobbed frame horns at the same time. Travelling rearward the frame kicks like an unbroken stallion with a whopping 8” tucked neatly under the reformed boot space. In an effort to attain clinically clean looks with reliable function all fuel lines, brake lines, hand brake cables and wiring simply disappear in fabricated compartments throughout the frame and body shell.

Wally set the stunning frame onto tried and true suspension components that he’s had success with since he knocked around with like-minded rodders Jimmy Rose and Bill Smith, back in the 70s. Setting the nose in the weeds is a custom made axle from Keith Bell, Super Bell Axle Company, suspended by a So-Cal Speed Shop transverse spring, shocks and polished hairpins. Keeping the lively rear in check an S type Jaguar donated its independent diff and on-board discs that are now dampened by Alden coil overs and formally dressed with a Mr Roadster hat. Wally says that back in 1979 he fitted his first Jag rear end from an E Type after he had seen in used in the States. Perched on custom machined and perfectly polished engine mounts, we find a 400 cu in Chevy with plenty of go fast goodies installed for spirited driving. The highly detailed engine was built to perform and is backed by a shift kited Turbo 400 controlled by a serious looking pistol grip shifter.

Not to be surpassed by the exquisite exterior, the cockpit of this delicious deuce is simply exceptional, both in design and execution. Just as the entire build was mentally pre-planned for a long time, the interior was no exception. All of those years spent studying the workmanship and bold designs of interior artists abroad, has benefited the grand finale of this amazing car. Heavily influenced by the American way, local trimmer Dave Britton at Annvid Upholsterers, Capalaba, was majorly instrumental in creating Wally’s ultimate interior.

“Michael fabricated the centre console, seat back and base from our own design out of 1.6 sheet steel before Dave stitched up the Rust toned leather that almost covers the entire interior,” Wally says. “It took two years to find the material in the correct colour and eventually it ended up being a new release that finally fitted the bill.”

Dakota Digital gauges were factory tweaked to now display Aussie kilometres are housed in a ’32 three window coupe dash that fits snugly up against the new windscreen frame. The stylish CNC machined aluminium door and seat embellishments were Dave’s own contribution to the design and really lift the elegance of the trim to a new level. Michael teamed up with dad’s long-time friend Fred Porada to complete the wiring and concealed everything from view as they progressed throughout the car, even going as far as channelling a wire relief and corresponding cover into the door hinge to provide juice for the fully functional windows.

I asked Wally what was the hardest part of the project build, to which I received an unexpected answer… “To part with it. This was supposed to be it and no more. It has my heart and soul. It just so happened that someone else wanted it more and he wouldn’t take no for an answer!” Wally says he argued for over an hour that it wasn’t for sale but to no avail. The roadster was supposed to accompany him to the States where he wanted to drive it to the Street Rod Nationals, but that dream will have to wait.

As the ‘32 wasn’t completed when sold, they were under instruction to finish the car as if it was their own… and they honoured that direction admirably. When Michael finish laying down the Rubens Mica Metallic paint and bolted the Billet Specialty Legacy billets to all four corners, both men knew that they had built a definitive deuce roadster.

Wally concludes, “It was an exhausting car to build but we are pretty happy with it. We wanted to build a high quality car that was a true driver. You can get in this and go like shit and stand back and be proud.”

“It’s also a showcase for the components that we sell and fit to our customers cars,” added Michael, confirming that they are authorised dealers for most of the products found on the car, including the innovative Lizard Skin spray on body insulation.

Wally divulged that this was a one off ’32 that he will never ever repeat, but you can’t help but believe that there’s still one more project in this well seasoned rodder’s imagination. 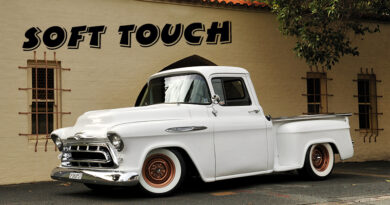 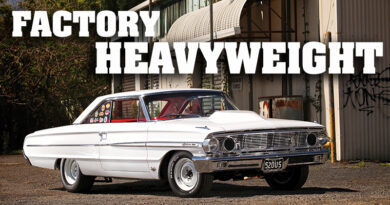 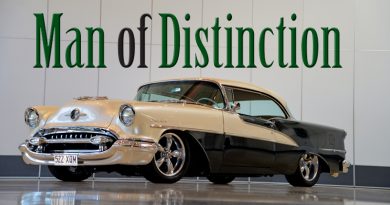