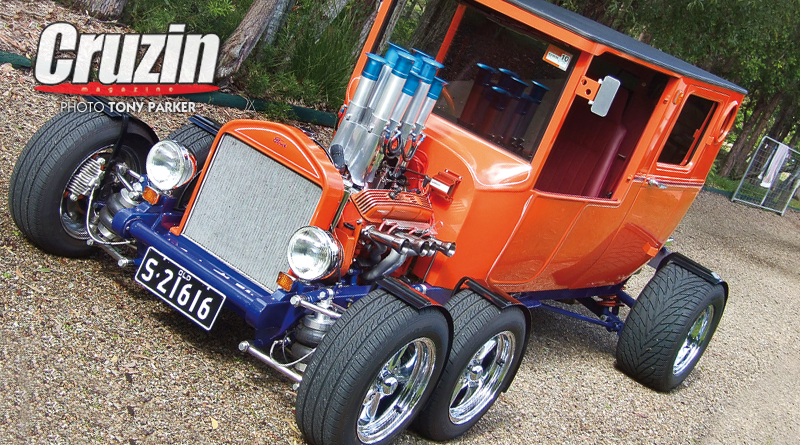 If I asked a room full of rodders to raise their hands if they had been inspired by building a model kit as a kid, the majority would rule. Most rodders, especially ones sporting a few too many greys under the cap, used the humble model kit as a window into the world of fantasy hot rods way before the Commodore 64 and the internet. The more creative builders experimented interchanging parts from one kit to another and scratch building pieces to achieve reality in miniature. A lick of Testors colour, careful application of decals and it was time to find a new place on the mantle. Even I remember the crazy 1/25 scale showrods from the fertile mind of Tom Daniel like, Ice T, Beer Wagon, Red Baron, and Bad Medicine just to name a few. It was pure escapism for the price of pocket money. Malcolm Kieselbach was one of those rodders with his hand unashamedly pointing to the sky who not only dreamt about building one of those nutty contraptions in full size he actually created his own version inspired by the Tijuana Taxi. 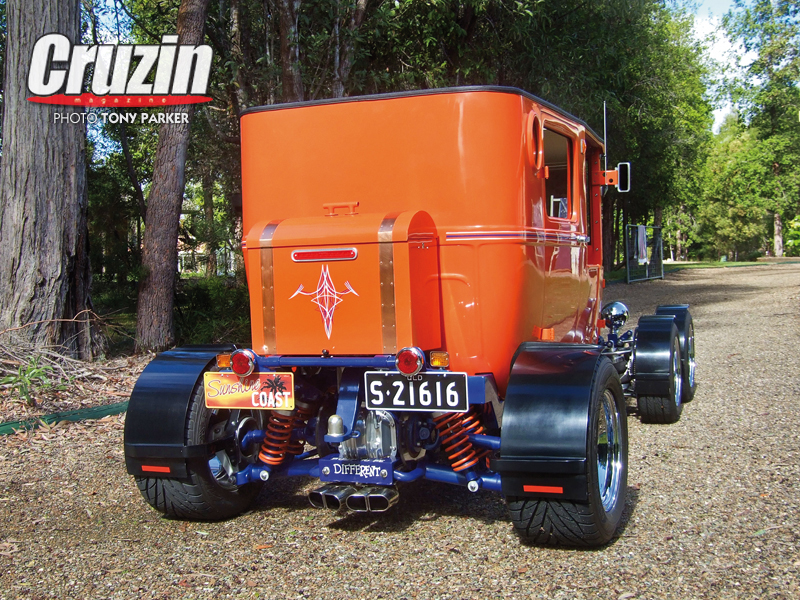 Now before you pigeon hole Malcolm into a box next to the padded room let me tell you that he really knows his way around early iron and has been part of the scene as an active member of the Romans Hot Rod Association for 48 years. His first hot rod was a 1933 Ford coupe named ‘Penny’, which was instantly recognisable by the installation of a Riley grille. This show winning rod was state of the art back in the early ‘60s and incredibly survives as is to this day. Malcolm was always talented with his hands, amassing an impressive string of cars over the past five decades including his signature ride, a ’36 Ford sedan. Finished in brilliant silver sporting a full set of moon discs and a healthy chop this rod never gets missed or mistaken. If it’s boring, bellybutton or uninspiring, he’s not interested in building it. Whether it’s a motorised armchair or a baby Thunderbird most things leave the workshop a little left of centre. After looking at the accompanying pictures some people might think moving from the beautiful Hawkesbury to the Sunshine Coast may have finally resulted in a bit of heat stroke on the old melon but I can inform you that this idea has been rolling around in there for the past 25 years.

The main compelling component for this concept was to create a twin steer hot rod, combining that with the Tijuana Taxi style visual and you can see where he was headed. The hardest part of the whole exercise was the unison of the twin Rod Tech front ends. 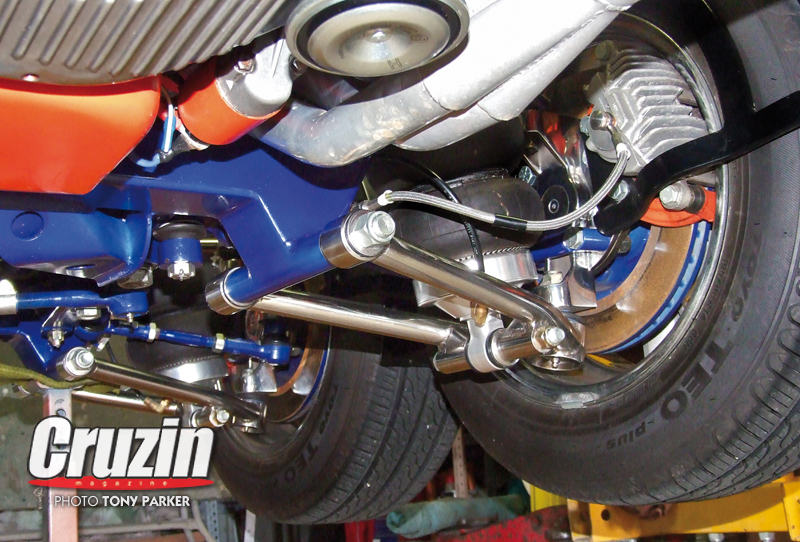 Malcolm explains; “I was lying in bed one night trying to work out how to make the twin steer double I beam a reality when I diverted from that plan to use an independent front end instead. With my mental construction making sense I jumped out of bed at some ungodly hour to sketch down my thoughts before they disappeared. The next day I took my rough design over to good friend Graeme Bevis who made his own sketch and agreed that it would work.” Remember this is no showrod and Malcolm spent a full twelve months designing the steering arms that mate to the Holden jackaroo box. Once perfected, engineer Rob Hopkins recreated the prototype into a one-piece unit at his Eillambor Engineering shop.

Graeme Bevis of Street Rod Solutions and Earl Gilchrist of Autotechnic were instrumental during the unique chassis design incorporating a Jag coilover rear to keep pace with aforementioned front suspension. Additional airbags upfront keep all the lateral load under control while the combination of six rotors, four Commodore plus two Jag callipers should bring this taxi to a screaming halt whenever necessary. When time came for the obligatory test it passed with flying colours. 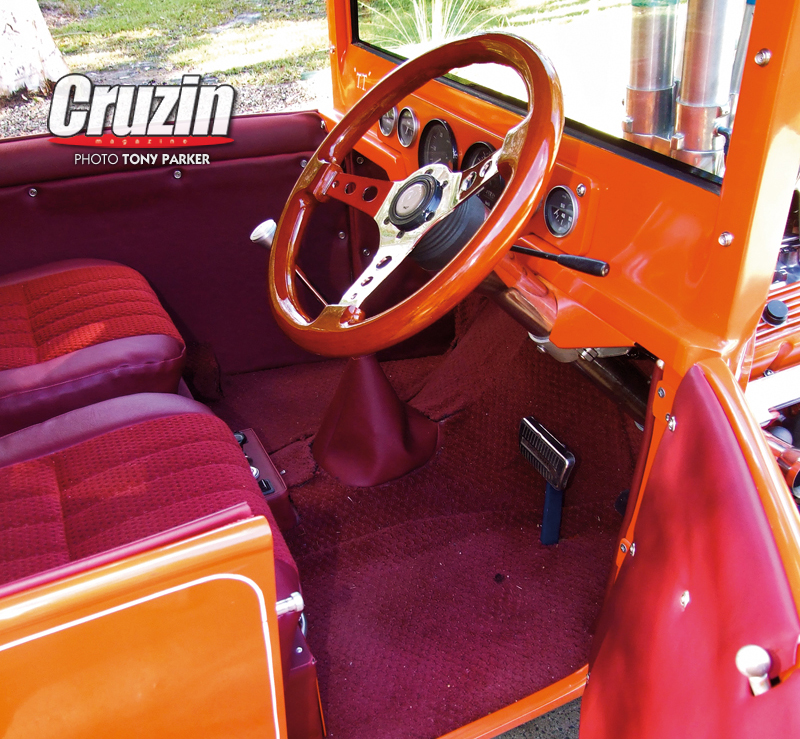 In keeping with the cartoonish character of the vehicle the Taxi’s power plant is accentuated by an array of bells and whistles camouflaging a humble small block Chevy. The stout mill received a Pro Comp intake with a 600 Holley hiding under the faux stacks and electronic spark for trouble free miles. Noosa Automatics refurbed a Turbo 350 that feeds power to the narrowed XJ6 third member built by George May Racing. Street Rod Solutions were given the nod to extract spent gasses away from the block with a pair of custom-made headers. A half dozen Toyo shod polished Dragway wheels sees this one of a kind T track straight and true down the blacktop.

With the ambitious chassis nutted out, Malcolm could now get to work on that jaw dropping body. Starting with a ’23 T bucket shell, Mal lopped off the unwanted rear section and built the rest from scratch. A steel skeleton is skinned in fibreglass and plywood to create this unique apparition into full size 3D model. While the driver might be affected by outside elements, coach occupants are greeted by plush surroundings fit for a Queen. Communication to driver is via the power assisted dividing screen. If the queen (or Sue as her friends know her) wants to ride shotgun, Mal has equipped the single door cabin with her very own power operated courtesy step. The big romantic. 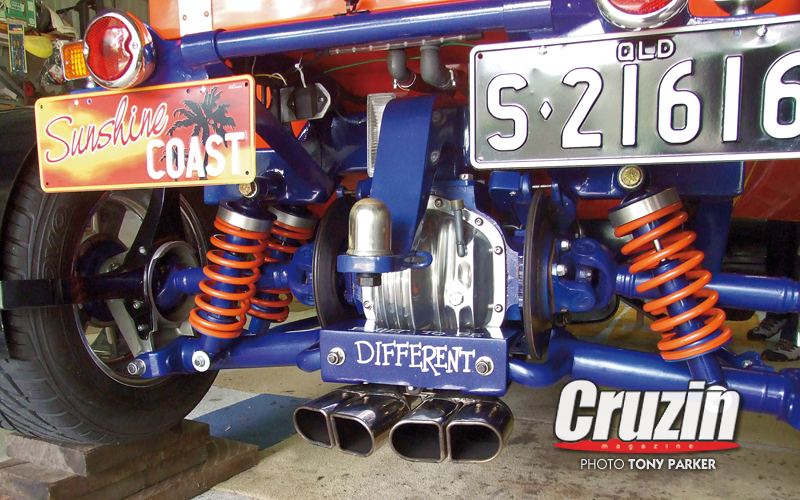 Mal’s hands on approach to hot rodding never ceases to amaze me. With owner input well above average at this point he also completed the upholstery and wiring before picking up the spray gun to apply the bold Mikan Orange acrylic lacquer. Keeping the colours striking a combination of red vinyl and velour now covers the interior while Nylon carpet continues the palette underfoot. Shane’s Auto Glass cut the clear stuff to order, which is a good thing as I don’t think you would find any of this available with a 1800 number. Way out back past the portholes, the hand made luggage trunk actually provides 75 litres of nourishment to the well-behaved Chevy. Topside of the detailed undercarriage a bevy of beauties to the surprise of everyone who happens to get their noggin under the Taxi. Rather then add a false floor between the sub frame and chassis as per norm, Malcolm affixed old school vinyl wrap pinups within the uniformed recesses. Quirky?… Yes. Cool?… Oh yeah! 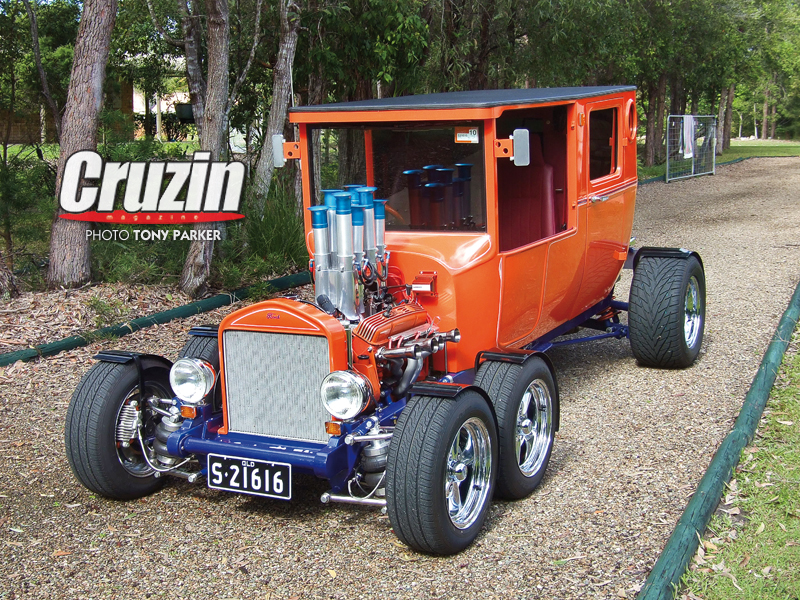 Enduring three years of head scratching, knuckle busting, engineering torment, Malcolm has finally exercised his quarter century old daydream. “Everyone asks me why?” Malcolm says, “I tell them it was done to be different, that’s what hot rodding is all about.”

It may not be everyone’s cup of T… but it’s definitely a marvel accomplishment, Tom Daniel would be proud. 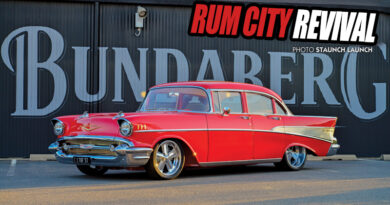 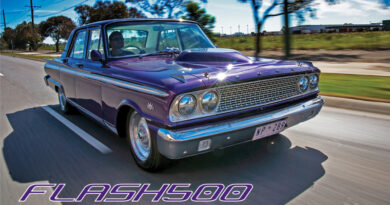 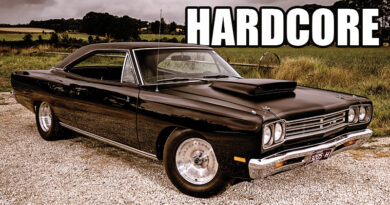