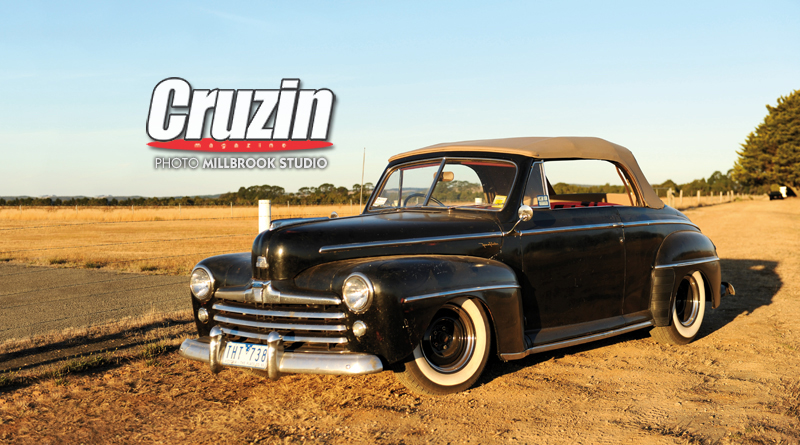 To say Graeme Blaby is a trendsetter may be over stretching it a tad but his influence on Australian hot rodding can’t be denied. Forever remembered for his award winning 1933 Ford 5w hiboy coupe back in 1979, the USA-styled rod was a slap in the face of all the resto rods that ruled supreme of that era in Australia. Modelled off cars like Jim ‘Jake’ Jacobs and Superbell fame Jim Ewing, the coupe was a personal milestone achievement for Graeme but the constant upkeep eventually wore him down. The fun factor was eroded by endless cleaning and polishing between hundreds of louvres on the traditional styled coupe until it was decided to move on and give the ’33 a new home.

Fast forward to 1989 and Graeme debuts his back-to-basics ‘33 Ford tudor with an astounding response, in the wrong direction. Deliberately built as a ‘beater’ with not one ounce of billet aluminium, painted in subtle tan and contrasting red, steel wheels and white walls, rubber running boards and a few dents left in the sheet metal for character, Graeme pronounced it finished. 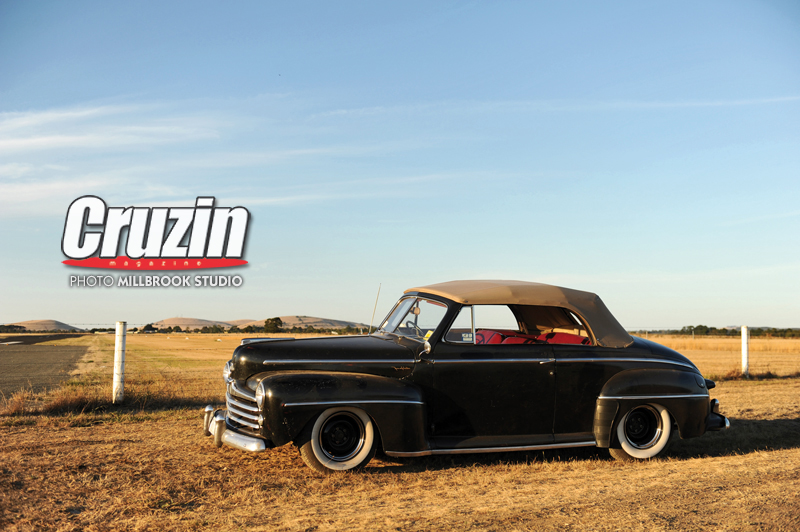 “No one got it! Graeme exclaims. “All people could picture was my old coupe and with the tudor I really think that they thought I had lost the plot.” Trying to create a hot rod that would fulfil the missing fun element of rodding, maybe Graeme was just ahead of his time? Looking back this was old school before the term became…well… cool.

Moving ahead nearly 20 years and Graeme’s still having fun with old cars his way, only now days there is a lot more believers with this style of vision. Just as he rebelled against the ever-increasing cost of hot rodding all those years ago, the ‘rat rodders’ of today echo his philosophy. You don’t have to have a $25k paint job to have fun with old cars. Although it would be nice and someday to maybe aspire to, it’s not essential. It was this movement that inspired the rebirth of this convertible but not as you’re probably thinking. I’ll let Graeme explain:

“Have you ever driven your hot rod past some shop windows and looked at the cars refection? Yeah Baby! The cars still got it! But holy god, what happened to the kid that used to drive it? The undeniable fact is that we are all getting older, so I sorta had it in the back of my mind that I needed a car that was bigger, fatter and uglier than me, and thus make me look good.” With that in mind and a fair bit of motivation from his mates to stop being a hot rodding ‘has been’, the search was on for the right vehicle. Trolling through eBay’s virtual car yard, Graeme found his ageing antidote, a 1948 Ford Convertible, which he believed, was bigger, fatter, uglier and older than himself. Although it was a complete runner with loads of original character and not sand paper patina, the only hurdle was its location, North Carolina! Now for me that would have been an issue, but for this well seasoned rodder it seemed no biggie. 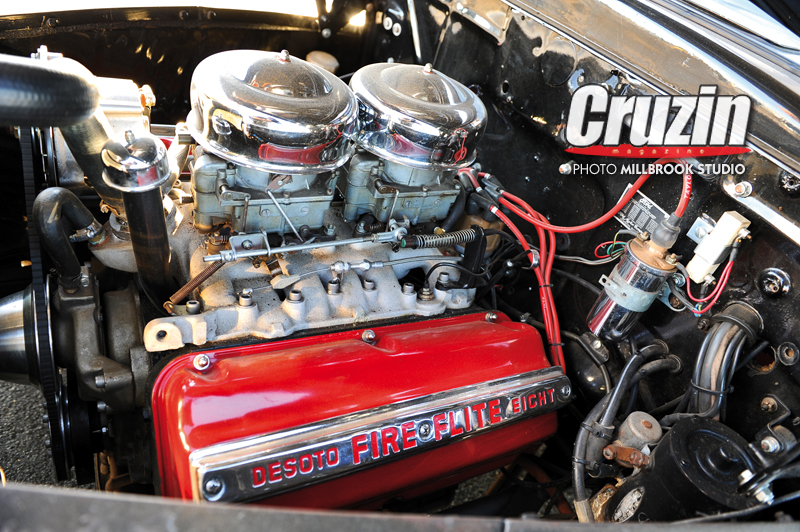 When the ’48 finally arrived on Aussie shores Graeme was more than happy with his Internet purchase. The old ‘vert was an unmolested survivor sporting a rebuilt flathead, twin carbs, a pair of Fenton headers and electronic spark. The sweet deal included stock three-on-the-tree tranny feeding power to a Columbia two speed out back. Neat. All Graeme needed to do was severely alter the ride height and find some shop windows.

After about 12 months in that guise, Graeme started to feel more like a restorer than a rodder and devised a plan to put the hot back in the rod. Back in 2006 when he imported the ragtop, sharing container space was a 1956 Desoto “Fireflite” out of Texas. The rebuilt Hemi had been bored to 340 cubes and restuffed with components from Hot Heads Research & Racing. Included was a pair of their heads featuring polished ports, hardened valve seats, guides, stainless valves and heavy duty springs. After a futile USA search for an appropriate cam, Queensland’s Ivan Tighe was given the nod for a custom ground original. A remote high volume oil pump, Chev water pump conversion, high torque starter and electronic ignition make for a reliable package. 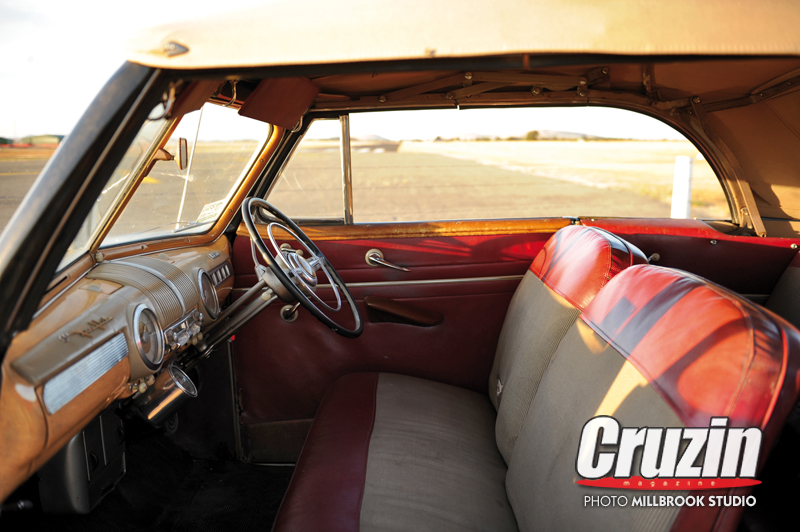 In the late fifties convertibles of this era were often seen sporting wheel spats and Appletons showcasing the mild custom style, what Graeme wanted to create was a sleeper. “Imagine a kid back in 1956 tired of the stereotypical opinion of his ride going to the wreckers and hauling out a rear ended low mileage same year Desoto and fitting it to his car. A donor car with the “Adventure” 340 Hemi performance pack, now that would be a real sleeper!” 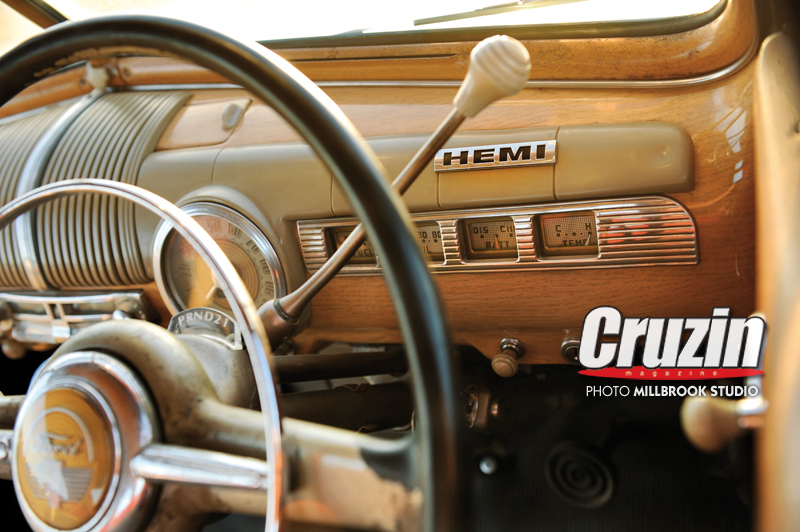 Behind the hot Hemi is a Wilcap (Hemi to Chev) adaptor connected to a Flat O Products (Chev to Ford) bell housing and drive plate rotating a C10 Auto with shift kit and high stall convertor. The Columbia is now replaced by a bullet proof Mustang 9” on semi-elliptics. Graeme is a firm believer of ‘bags are for shopping’ so used his noggin instead of cheating to achieve the desired stance. A ‘Hell Raiser’ axle was slipped under the front end utilising a Posie super slider spring with reverse eyes. Graeme is more than happy to credit Colin Bates with installing the upgraded running gear, brakes and steering to the original frame. Disc and drum brake combination come into play via the stock pedal assembly.

With the new stealthy drive train installed it was time to keep it under wraps by reuniting the body and frame. With no intention to mess with the original paintwork careful consideration was adhered to when converting the LHD dash to the Aussie side of the road. To keep interior aesthetics as charismatic as the exterior, a 1954 Customline steering column was used incorporating a stock gear shifter and indicator selector. The wood grain finish looks a treat adding a taste of luxury to nostalgia. A receipt for the last upholstery update was included with the car dating the retrim circa 1960s. Using a new ‘LeBaron Bonney’ kit, Milner’s Autotrim sympathetically recovered the fully operational hydraulic drop top with a befitting result. Brother Rich was called on to help Graeme when it was time to reroute power leads for the Stewart Warner informers and hidden CD player. 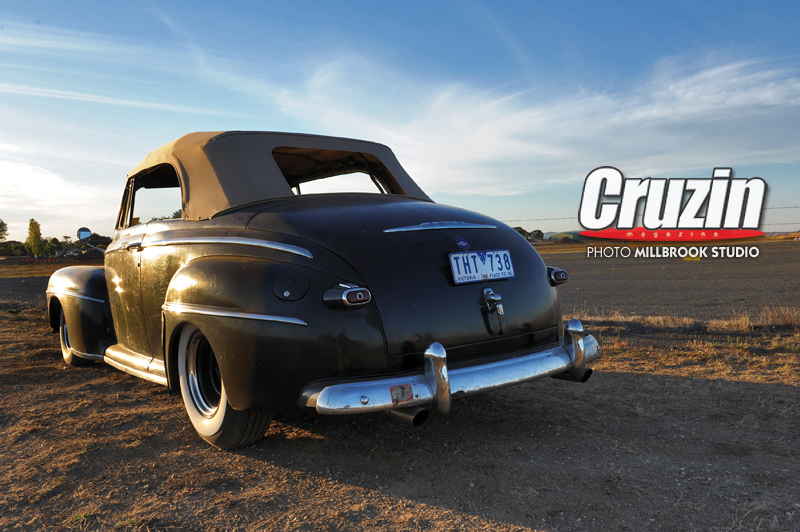 White wall radials fitted to the steelies give the best of both worlds, looks and drivability. Stock ’48 trims with nuts exposed give off a no frills ready to rumble persona.

When I stumbled upon this old Ford during the dying light of Ballarat Swap, it was alone, sunning itself in the 38 degree heat. My initial reaction was, “that’s cool, I wonder how much it is?” On further investigation I kept being drawn in, sighting added tricks that aroused my curiosity. Aged appropriately, unusual badges such as Fireflite and Hemi adorned the hood sides and dash leading me to believe that there was more going on here than just an old ride. Not wanting to leave with unanswered questions I rattled a few nearby tents to be introduced to the ‘48’s owner, Graeme. He was only too happy to chat about the car and pop the hood revealing that hidden Hemi heart transplant. Things started to make sense and I knew I needed to share my uncovered treasure to those whom appreciate this style of car for what it’s meant to be – Fun. 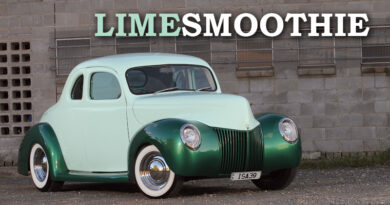 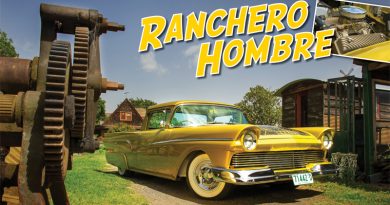 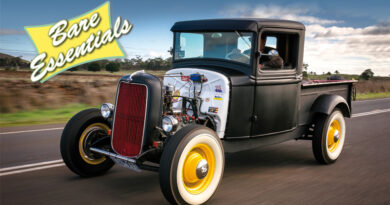