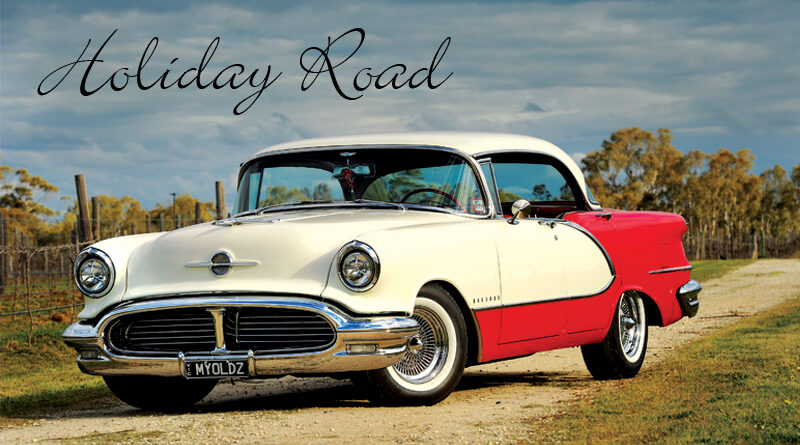 In 1956 the Oldsmobile 98 was produced on a new chassis boasting an extra 4” in length over the less expensive 88 model. Amongst the four body styles available, including this delicious four door hardtop version, nearly every luxury or optional item available was offered with the 98. Standard options included power steering, power brakes, six way power adjustable seats, power windows, Hydra-Matic automatic transmission, special wheel discs, dash clock, windshield washers, padded dash, and courtesy and map light. Combine this with a dramatic two tone colour scheme, an unrivalled interior design highlighted with abundance of chrome and stainless steel and a legendary Rocket V8 under the hood, you can easily see why anyone with a remote interest in cars are drawn to these irresistible automobiles.

Brian Johnson is no exception, drawn in like a moth to the proverbial flame when he discovered this Olds 98 for sale on Craig’s List back in 2008. It was actually the first Oldsmobile that he had ever really seen!

Brian is no virgin to the classic car scene he imported a 1957 Chevy over ten years ago, gave it the once over and has driven the wheels off it ever since. With a hankering for a new ride Brian set forth to the homeland of sheet metal and chrome with wife and child in tow to enjoy a family holiday, all the while entertaining the idea of taking home more than just Disneyland souvenirs. Amongst the usual tourist attractions Brian found time to troll through hundreds of vehicles on the net just looking for the one that moved him the most… and within budget.

As the trip was nearing toward the end one potential Lincoln grabbed his eye but the six hour transportation fee kinda snubbed it out. Closer to home, or the hotel room, the Holiday 98 appeared to be a better option and well worth a look. As Brian rounded the corner of its current abode he was immediately captivated by the big Old’s good looks and unconventional styling.

Even though the paintwork was in disarray and the chrome was decayed, Brian could see the potential of turning the rust free, unloved 98 into a unique cruiser. With approval from both girls and the budget sustained, the LA-based hardtop followed the Johnsons home for a fresh start.

Back on Victorian soil Brian hooked up with good mate Chris Pantony to attack the tried and shabby exterior. With the help of Steve Dolphin, all of the body trim was stripped and every small dent, scrape and evidence of road rash was repaired before the original colours of Alcan White and Festival Red was reapplied in Baslac two pack. While the paint cured the acres of stainless trim and chrome was renewed with the plating handled by Classic Chrome in Geelong. When all the lumps and bumps were tapped from the trim Brian rolled up his sleeves and hand polished them back to a factory finish.

One major plus that helped the resurrection and the wallet was the condition of the interior. Brian really got lucky here as the only part of the trim that needed to be repaired was the front seat, and to top it off the buy now price included replacement material in the deal. Seems the guy that sold the car was the second owner and was “gunna do it up” after purchasing it from the original owner. Brian reckons that the first owner must have been a huge man as the drivers side seat needed to be completely resprung and repaired, whilst the backseat still retained its plastic delivery covering. After a thorough clean of the entire interior along with the restored front seat and original carpet, the stunning interior was returned to its art deco magnificence.

With the body beginning to resemble its mid fifty’s glamour, Brian turned his attention to refreshing the Rocket 324 by treating the stock mill to a complete rebuild. That included a 30 thou overbore, new slugs, new valves and a reground bump stick by Wade Cams.  After coordinating all the necessary machine work by North Geelong Engine Reconditioners and parts chasing, Brian, got his hands dirty reassembling the fresh components with the help of mate Brian Lockman of A.E. Performance. Not bad for a guy who delivers the mail on a daily basis and subscribes to the notion; “I’ll have a go at anything…you can only f*#k up can’t ya!”

While the stock carby still breathes life into the vintage motor via Pertronix electronic ignition exhausted fuel is now expelled trough custom twin wicks, pieced together by Andrew Darby at Moolap Mufflers. Backing up the Old’s power is the original four speed Jetaway Hydra-Matic that Brian has also upgraded with a fresh rebuild. “I dropped the transmission out with the car on the ground and man it was ridiculously heavy. It weighs a tonne!” he confesses.

Hiding under that gorgeous grill and front sheet metal Brian installed a replacement disc brake kit from the states and another pair of Pedders shocks. Steering was also upgraded with a later model box that rewards the driver with a new found confidence in the old girls handling.

With all the major parts back where they belong, Brian was still searching for a wheel and tyre combination that suited the 98’s restyle and fitted around the new front brakes. During the 18 month resurrection of this classic, friend Brian offered his own set of LA Custom 100 Spoke Wire’s that he was saving for his Desoto project as a temporary measure to the stock steelies. Needless to say the spokes really made an impact and he soon found himself ordering a replacement set.

With new side glass and a rebuilt fuel tank it was time for Brain to gas up the big Old’s and enjoy a new kind of Holiday. One that he and the girls won’t have to leave behind anytime soon. 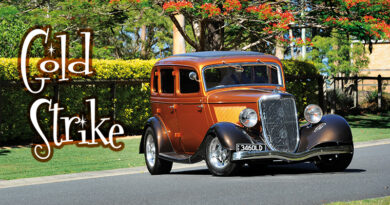 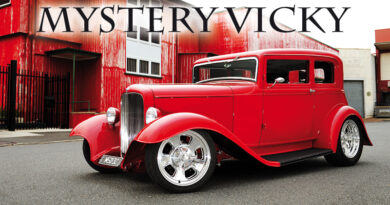 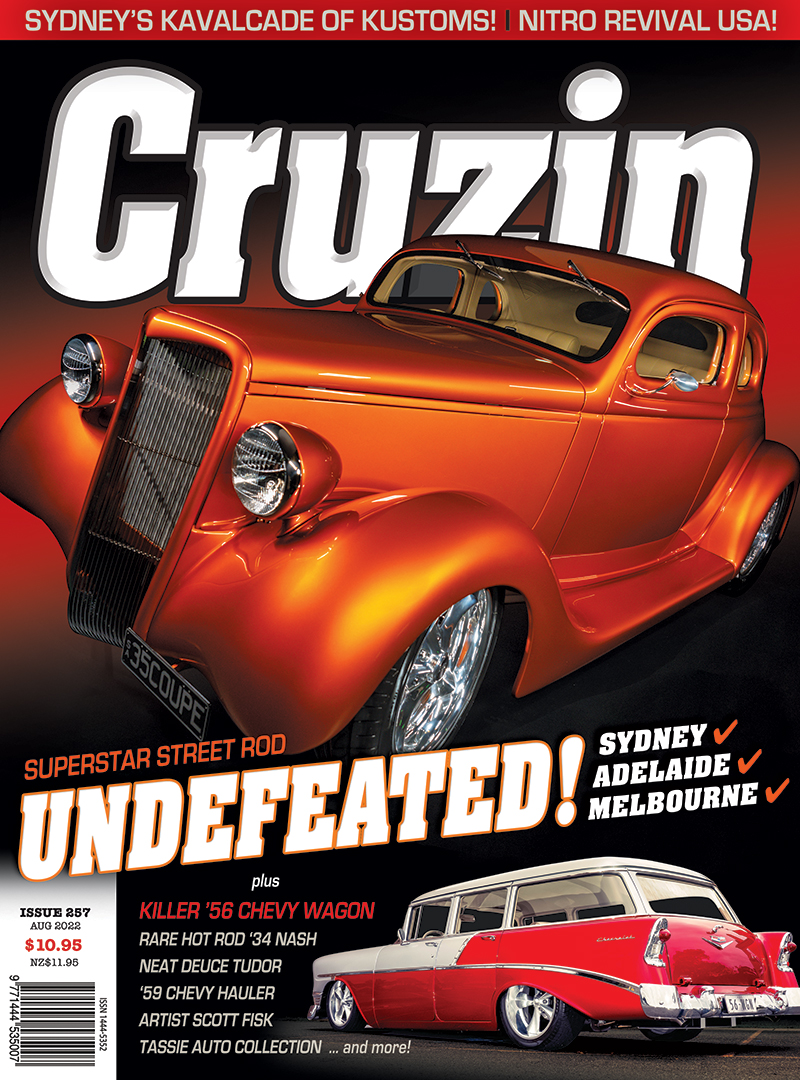 Gerald the Goanna says Git-R-Done at the Goanna Run! Desert City Rodders are pleased to announce the return of the