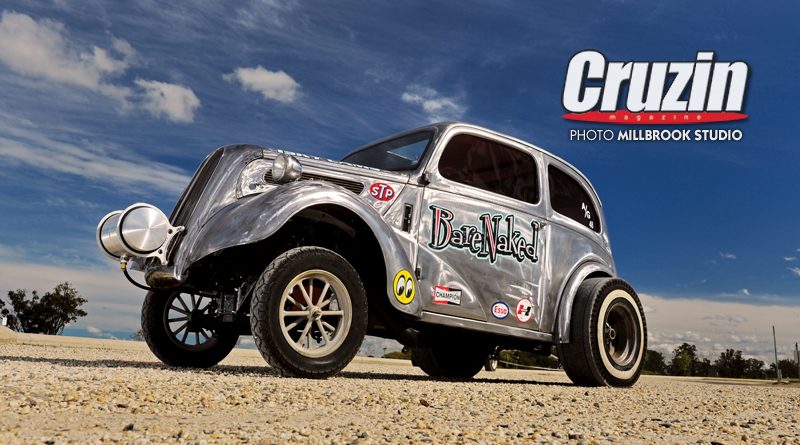 After experiencing the lofty heights of Top 10 Summernats accolades with his show only customised Monaro, Jody Vincitorio stepped down from the podium and built this old school gasser Anglia, just for kicks.

A self-confessed car guy from an early age, Jody has been panel beating since the day he left school and over the years has earned quite a reputation for massaging metal and paint. After working for around 30 body shops throughout his career he’s learnt quite a few tricks of the trade and continues to offer his knowledgeable skills at his own shop, JV’s Paint & Panel, formally known as Old’s Cool Panel Shop where Jody worked alongside his equally car obsessed brother, Kyle for around eight years. After deciding to go it alone under a new name, his crowd stopping Monaro would become his all-important calling card available for world scrutiny. Hindered by time constraints to have the car for début at Summernats 25 the completed but un-driveable sleek green Monaro achieved the desired notoriety with a massive $100,000 price tag. The show only machine became a pedantic precious jewel that required kid gloves to maintain and was covered and shelved for six months after its tour of duty. 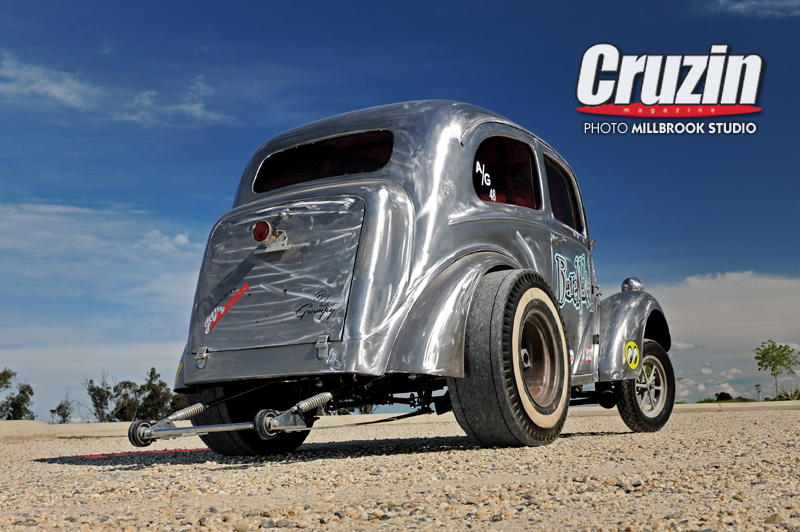 In need of some much needed stress relief Jody and a few of his buddies attended the event Chopped in 2012 where they observed entrants having a ball in their no frills rides. Inspired by the level of fun to be had for little cash outlay his fate was set at the sight of a bare bones gasser. “I knew I just had to have one!” he said. As soon as he returned to his shop Jody scrolled through his client details in search for a lead on a suitable vehicle. “I had this guy come into the shop that was really into his pommy stuff and mentioned he had this old Anglia up for grabs, but at the time I wasn’t interested. I couldn’t call him quick enough to see if it was still for sale.”

Fortunately it was and he was soon on his way for an inspection. Unfortunately it was in a pretty sad state in the flesh but after negotiating on a price, less the driveline and wheels, the project was affordable for a panel beater. While the Monaro may have taken the best part of three years hard labour and bucket loads of coin, the nose bleeding Anglia was all but done in six months with the help of good mates and a bunch of donated parts. 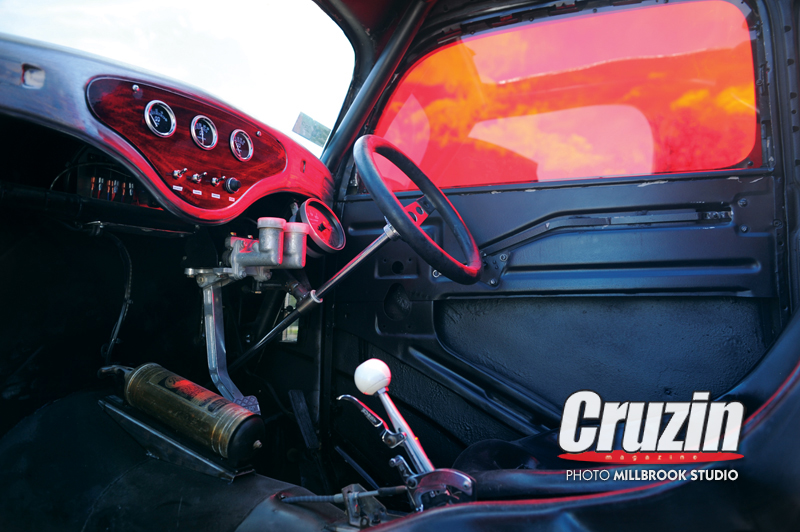 Although Jody had postponed his wedding to finish the Monaro, he finally tied the knot two weeks after buying the Anglia and while on his buck’s night ended up with the front wheels and a pair of tyres.

“A few mates and I rented a bus for my buck’s night and we ended up dropping into Rod Hadfield’s museum for a look see. My mate Trashy spied this set of spindle mount rims and said ‘that’s what you need for the gasser!’ Rod said they were the real deal but that they were no good for racing because one had a buckle in it, but for what I wanted they were fine and he sold them to me. He also said that he had some cool tyres that turned out to be a pair of original Hurst piecrust slicks so I bought them too. The wheels really set the scene for the gasser and I got stuck into the body.” 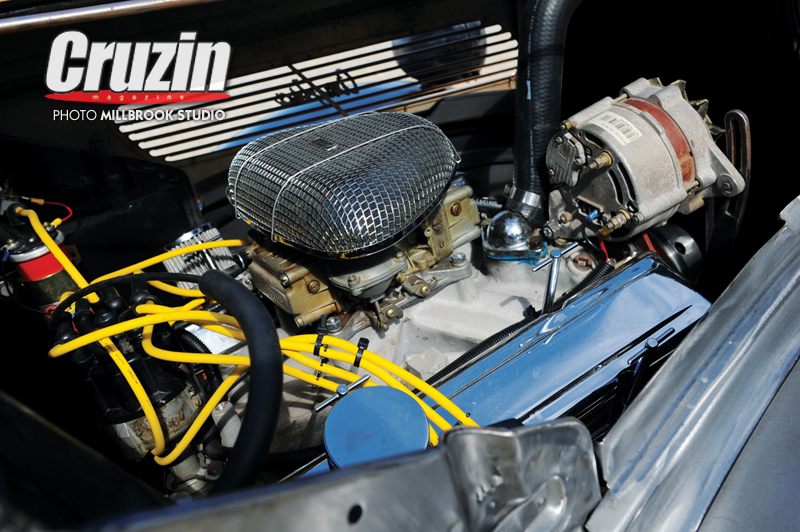 From what Jody could ascertain the original 1948 body was made up of two sections, one from the cowl forward and another making up the rear. Inside the shell it was a floppy mess which is now supported by a full roll cage. After repairing all of the rust holes that perforated the English tin, Jody hand filed the bare metal beast to the desired appearance knowing full well that he wasn’t going to paint it. A smattering of well-placed logos and a bit of door art was all that was needed to complete the look. On closer inspection, all of the artwork is hand painted in house at JV’s.

From the outset this was always going to be a bare bones brawler, so don’t expect to see any tweed or leather trim. The sparse interior is dominated by the Jeff Archer-supplied red tinted pexiglass that glows like a devil’s lair. Lucky pilots are strapped into a pair of fibreglass seats and informed by a set of Moon gauges inset into a modified stock dash and a column mounted tacho keeps count of the revs. Jody lists the steering wheel as “old & cool…and donated” and directs movement through a Vega box attached to the modified column. The just as cool shifter is pure vintage Hurst. Ejection from this time capsule is operated by repurposed 8mm ring spanners. 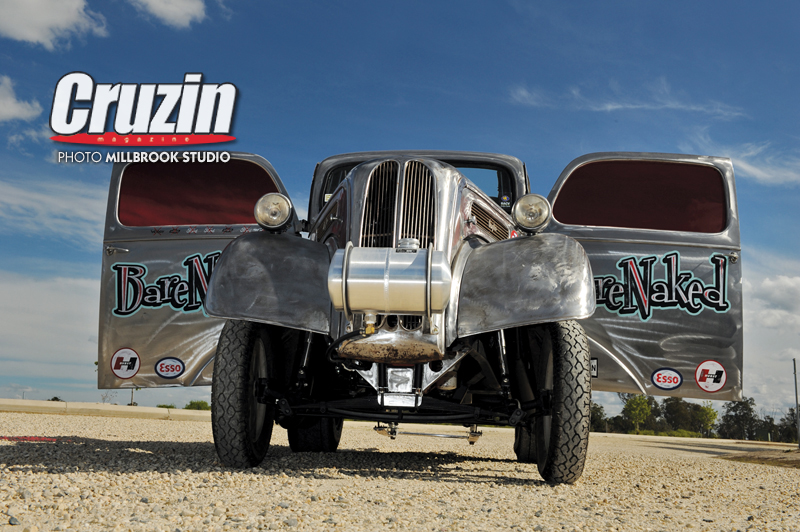 Underneath the reworked body lies a fabricated frame that utilises a modified ’48 Anglia I beam axle with no provisions for brakes. Out back a slippery Borgwarner diff is located with a four link setup and donated wheelie bars. Shoehorned under the stock hood is a 283 Chevy with powerpack heads, Edelbrock Torker, Holley and Mallory dual point. The running mill was left as is and mated to a two speed Powerglide and Hurst shifter that boasts plenty of power for the little pocket rocket. The Moon tank up front is plumbed for fun!

After attending Chopped as an entrant in 2013 Jody still sports the smile generated from having so much fun with his pants on. Along with a blower, entering some nostalgia drag racing lies in the future of this Bare Naked Brit, but he is quick to admit that he will need new front wheels first. 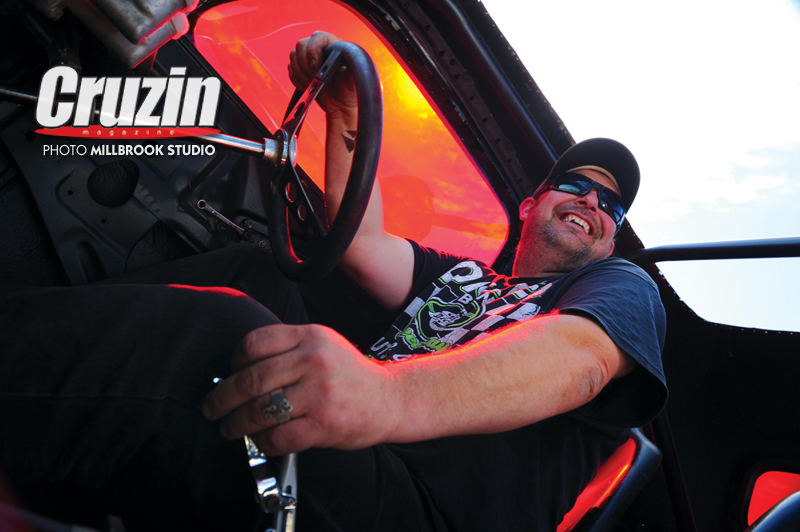 After enduring the build of his Monaro, Jody swore never again, but this is whole new chapter filled with fun and enthusiasm that’s easier on the bank balance. He is also quick to credit his mates Grumpy, Troy, Steve, Doggy, Titts, Shaun McCarrol, Rod and Woody with a special thank you to his gorgeous wife Sonia. “Without friends you have no hope of building and finishing anything.” 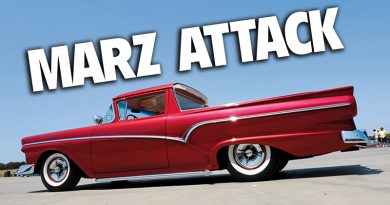 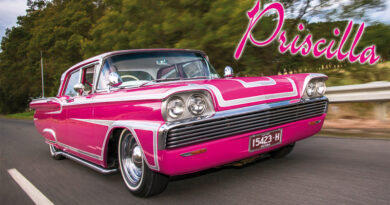 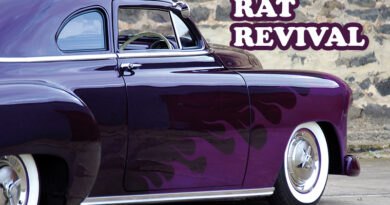