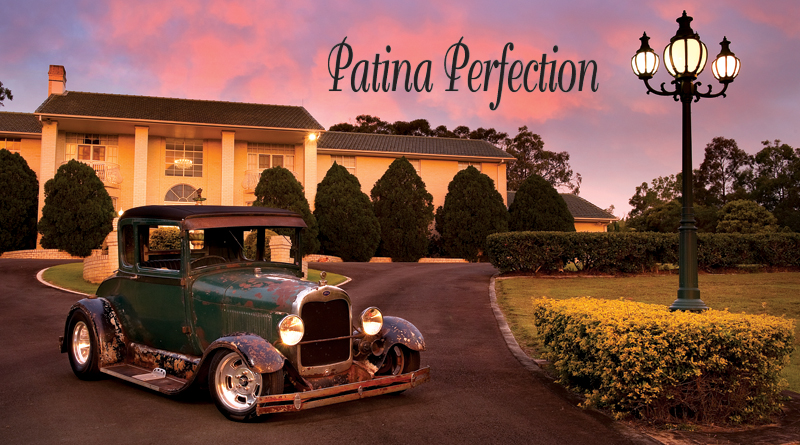 From Stock Car to Rock Star in Record Time!

Every once in a while I get the chance to showcase the talents of someone that I know, who taps to the same beat that I have for most of my adult life. Darren Silich is well known within the hot rod community, he’s the fast talking larrikin at the end of the Oz Rods phone when you’ve ordered parts for your own project. Yep he’s the one with the colourful lingo and can recite part numbers like a walking encyclopaedia. Always busy and in demand, but he’ll always get back to you… eventually.

I’ve known Darren since he was a single lad who became popular with the NSW highway patrol in his hot hemi six powered charger. Back then his soft spot for the 1928/29 Model A Ford was unwavering, just as it is today. His first hot rod, a ’28 roadster pickup, took him nine years to finish and by the time he could enjoy the fruits of his labour, he was married with a one year old daughter. The precisely finished RPU was everything he envisaged; perfect stance, brilliant Smith’s chip packet blue paint, timeless interior and V8 Hemi power. Eventually, the boyhood fantasy became some else’s dream and Darren fell out of love with early iron. Surrounded by everything hot rod related for six days a week and on weekends away was simply hot rod overload. He even moved on his ’28 Tudor project.

Fortunately for a few selected friends, Darren’s qualifications as a fitter and turner, along with his dab hand at chassis fabrication, expert welding, engine rebuilding and vast automotive knowledge, was still obtainable when he could find the time. Meanwhile, he was happier mowing the lawn in perfect diagonals on his John Deere than spending time in his shed for himself. All that changed with an intervention by his lovely wife Vicki, who enticed him into buying another Model A… for herself. A 1929 of course!

“I sold the pickup in 2007 and I was over hot rods at the time,” he explains, “then I got a call from my old boss and good friend Greg Thomsen, telling me to have a look at a car that he just brought in from the States. I had a look at this ’29 coupe and thought to myself that it was a great car… for someone else.”

Darren didn’t lose any sleep thinking about the Model A and geared up for his annual family holiday to the Yamba Rod Run. Ironically or coincidently, Greg also arrived at the run, as usual, but this year he had the A coupe in tow. “As soon as Vicki saw it she said, ‘I want that car… I want to buy it!’ She hassled me all week and we bought it on the Sunday of Yamba run,” he recalls.

With the coupe unloaded at home, a plan for its rebuild was put into play for about a month with hopes of getting the ’29 done in time for the ASRF Nationals on the Gold Coast. When reality surfaced that he wouldn’t make it, Darren shelved the project temporarily. That was November 2013.

As the dust settled from Christmas celebrations, work get-togethers and family vacations, Darren found himself with a renewed agenda, choosing Valla Rod Run as a maker to debut Vicki’s finished coupe. With rehabilitated enthusiasm for old cars, he was on a mission hooking into the build mid year and didn’t relent until he was done.

I find it perplexing how old cars translate their years of being driven, loved, abused and just surviving into a soul that in reality can’t be true, for they are a material object.  But just sometimes, certain cars develop their own quirky personality that can’t be explained. This little green and black coupe is one of those cars.

Excited for the first time in years to begin building another hot rod, Darren self-set a few ground rules that were imperative to achieve.

“All I wanted was a stupid cranky arse motor that had a lumpy cam and I didn’t really care what brand… and it had to be a manual. The day I bought the car I sat at home and found the wheels that I wanted and built the chassis and the body around them.”

I’m not sure if Vicki was in on the cam plan, but he was happy in the shed wrenching on a hot rod so that’s gotta account for something…right!

As the coupe was a good driving original when purchased, Darren let it be and concentrated on building a brand new foundation to fulfil his vision. Starting with a pair of stamped Model A rails he sliced off the rear section and stepped it five inches to accommodate a narrowed Ford 8”on parallel four bars. Rod Tech panhard bar, coil overs and shocks were employed to keep the bum where it needs to be and help cushion the short wheelbase ride. Lowering the front end is achieved by a four inch dropped and drilled I beam axle, also located by four bars. A Rod Tech transverse spring and a pair of Pete and Jakes shocks keep bumps to a minimum.

Cost containment was massively boosted with a freebie motor donated by Darren’s supportive boss at Oz Rods. “When I was at Yamba talking to Graham about buying the coupe, he said that if I did, I could have that 283 Chevy sitting at work. I thought that sounded alright. It was a reconditioned engine but it had oil pressure problems. I pulled it all apart and redid it.”

After piecing the Chevy small block back together, Darren added a pair of Edelbrock E-Street heads and same make RPM intake with a 600 Holley. The stock internals come to life thanks to a custom ground COMP cam that has bumps as big as Dolly Parton. Spark is delivered by an old Mallory dual point that was converted to electric using a Crane XR700. Once ignited, spent fuel escapes through a pair of Chevy rams horn manifolds into an owner made stainless 2 ½ inch twin system.

While the chassis was a snap for this garage guru, ticking his third item off the ‘must have’ list proved more problematic. To legally fit the Real Rodders deep dish rims under the fenders, installation of a full floating hub kit was a necessity. No biggie I hear you say… try that under a ’29 with four bars. Darren overcame the situation by re-configuring the bar arrangement inboard of the frame, along with a little bit of colourful language. He also modified the drum brake backing plates accordingly, which perform perfectly in unison with the XF Falcon rotor and Commodore calliper combo up front.

Unbeknown by many, the stock Ford sheet metal was destined to be painted from the get go, it wasn’t until Darren posted a bunch of in the build photos on social media that started to sway his decision. “Originally, I was going to paint it black but at the time I didn’t have the money. The more I showed it on Facebook I started to fall in love with it as is and we decided to never paint it.”

With that massive hurdle avoided, Darren pressed on augmenting tin work where necessary. Amazingly, the 87 year old body only had three pin holes of rust under the rumble seat and one small dent in the lower deck lid panel. Check those stats against your grandmother! Body modifications were limited to recessing the firewall two inches, relocating the original seat eight inches rearward and raising the rear floor section under the rumble seat five inches. A wipe of WD40 and call the bodywork done!

To complement the exterior and not to get confused with a rat rod, Darren entrusted the expert work of Bayside Trimming to stitch up a tasteful interior that was time limited to the seat, top and rumble seat. To meet his looming goal, door trims and headliner were fashioned in MDF and painted satin black while carpet is al-a-natural tin. The original steering column was modified and reused in its new position, mated to a RHD Vega box.

Once Ando custom built a new wiring loom and connected the spaghetti, it was time to load the improved A onto a trailer bound for Valla, just four and a half months from start to finish. Considering he still worked his day job six days a week this is a massive feat!

“I left work Friday lunch time and trailered it to the registry office and paid for the rego, headed to Valla and dumped it at the park and drove home. I then hitched the van and the family and drove back to Valla. I pulled up at about 11am in the morning and there were about 30 people crowded around the trailer. When I fired it up to unload I couldn’t help but smile. It was pretty big reaction. I don’t think I would have had the same response if it was painted. People say great rat rod but it isn’t. There’s too much stainless in it for that,” he laughs.

It obviously struck a chord with his peers also, picking up a Top 10 award at the run and another Top 10 at Yamba Rod Run exactly one year on from when he bought the coupe.

Darren confesses that at first it was a cranky bitch to drive and Vicki hated it. He says that the heavy clutch and massive cam didn’t help, but they got passed that and she loved it. Unfortunately, or fortunately (whichever way you look at it) this story ends with Darren giving up his charismatic coupe to another owner who made him an offer he didn’t refuse.

“I’ve known Doug a long time and he wanted it more than I did and offered me good money. After I made the handshake deal I said to him if you change your mind or can’t raise the money, don’t feel bad as I don’t really want to sell it. Then he felt bad, saying that he caught me on at weak moment and had a drawing done of it for me as a thank you.”

“I need to thank my wife and family for being without me for the four and half months, John Davies, Ando’s Mobile Auto Electrical, Father in law Ian Ward, Michael Haberfield and my dad.”

“I’d love to see it in the garage still, but I think I enjoy building them more than driving them. Vicki just said get another one and build that… so I did!” So now there is another Ford sitting in the backyard of the Silich household. This time it’s a tourer that can comfortably cruise Vicki, Lara and Chase in style at the next rod run. Oh and yes, it is an early Model A! 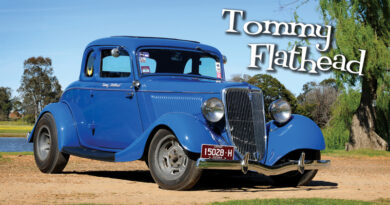