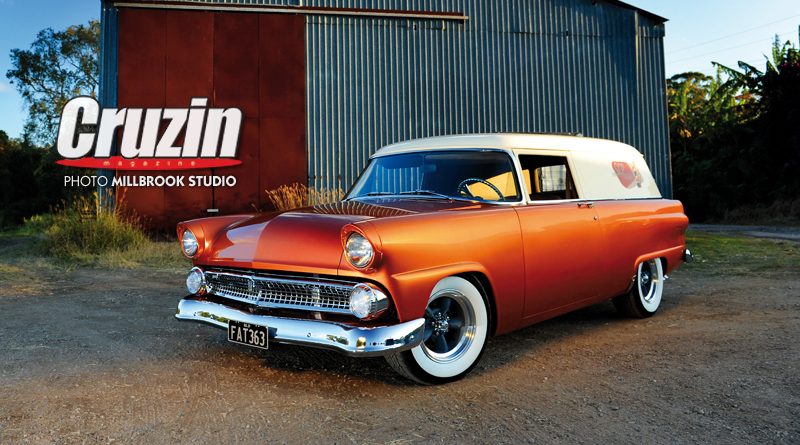 After taming a rust riddled pony car convertible and piecing together a very tidy Customline, Garry Moore and wife Debra set their sights on a new project that was just a bit different than most. “I chose the ’55 Ford delivery because of its rarity, and the make and model really appeals to me.” Garry confesses.

Originally sold as a Ford Courier in the United States, Garry found his unusual delivery already on Australian soil, imported around six years ago by Greg Thomsen and Col Dunn. Wearing its ‘as purchased’ bright yellow exterior and purple interior, it sat idle for a short period of time until Garry attacked the weathered workhorse, dismantling it into a million pieces across the garage. “I’m good at that part,” he chuckles. Reassembly the dismembered delivery took a wee bit longer and grew into a family affair that became life changing. 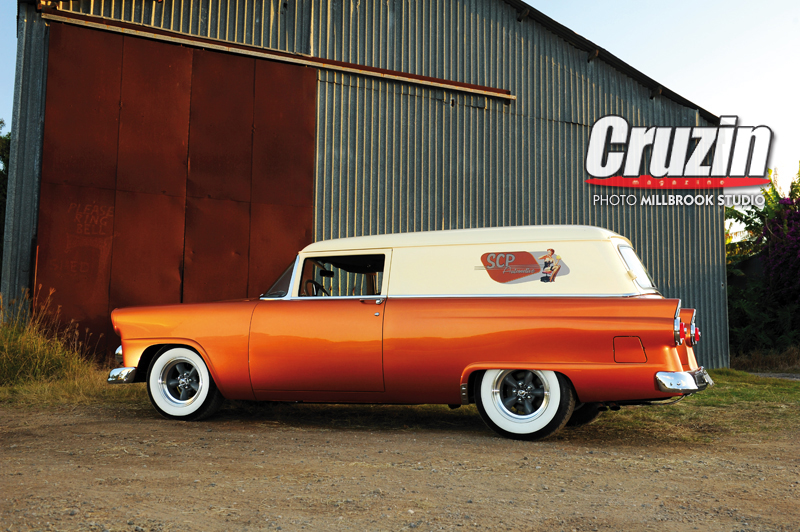 At the time, Garry’s daughter Cassie was elbows deep learning the trimming trade under expert guidance at Annvid Auto Upholsterers, and hubby Steve Pesch was honing fabrication skills at Coach Concepts. Working together on the rebuild of the delivery over the five year duration inadvertently spawned their business, SCP Automotive and ‘Gloria’ (as she is affectionately known) would become their rolling business card.

“All I said was that I wasn’t in a hurry,” Garry adds, “that helped spread out the cost and let Cassie really have her way with the car.” 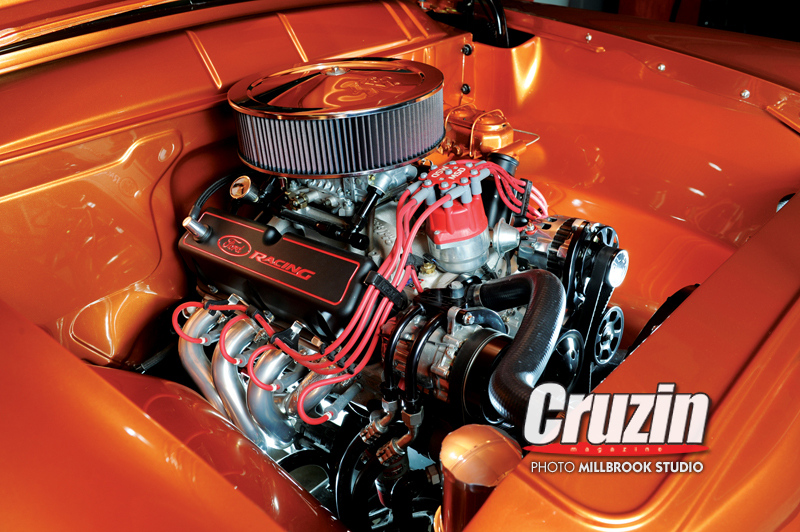 As one could imagine, the delivery evolved over that time period also, from daily driver into high end cruiser with help from a few experts along the way. Not wanting to repeat how his Customline behaves at the steering wheel, Garry decided to improve the front end technology by adding a Mustang front clip from Fatman Fabrications. The new component was installed by Brian Pratt at Exhaust Innovations and incorporates power assisted rack and pinion steering and disc brakes.

As the new front end already came outfitted with engine mounts, installing the power plant of choice was a snap. “I may not have had any input into exterior colours or the interior, but I won with the engine and the white walls,” Garry chuffs. Insisting on a Ford in his Ford, Garry had Fataz High Performance Engines pimp a 302 Windsor into a 363 cubic inch stroker. The Dart block runs a Scat crank, H-beam rods, Edelbrock intake, Holley fuel mixer and MSD ignition. Exhaust Innovations was once again tapped to custom craft the Tri-Y extractors and dual 2 1/2 inch system. Precision Automatics worked over a C4 transmission that hooks to a limited slip nine inch sporting disc binders. A full set of 15”x8” American Racing five spokes in cast finish wrapped in BF Goodrich wide whites, set all the aforementioned components in motion that were orchestrated to perform in harmony by A1 Automotive. 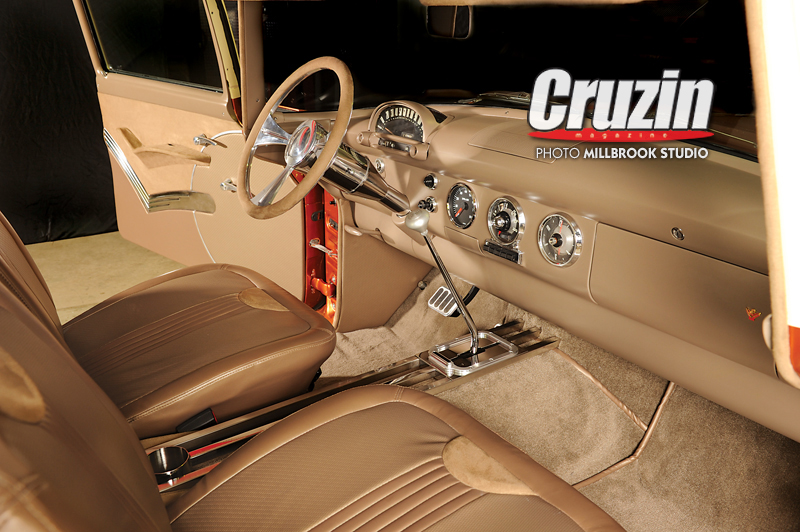 Stripping the body bare revealed a better than average shell (albeit with many years of wear and tear), but the floors were shot! Searching for the right man to tackle the bodywork, Garry was introduced to Paul Elms at PE Customs. This would be the start of a long relationship between Gloria, Paul, the family and a tilt tray, but the results paid off.  “I lost count of how many times she has been on a truck,” Garry vents, “I should have just bought one!”

Other than the outstanding two tone paintwork, most admirers would overlook the subtle changes applied to the almost stock exterior, as the budget basement model Courier was a no frills worker. Badge removal was minimal and the stock side moulding was about the only existing bright work except for the bumpers which are now 50mm closer to the body. That huge swinging door is a factory fitment, and whilst originally void of any external chrome, a trim piece from an old Toyota Corona was repurposed to complete the beltline trim. The original handle has been deleted and electronically activated door poppers installed. Further refinements included removing the quarter glass windows before installing new side glass and windscreen. Garry added the stainless windscreen moulding lifted from a donor sedan. 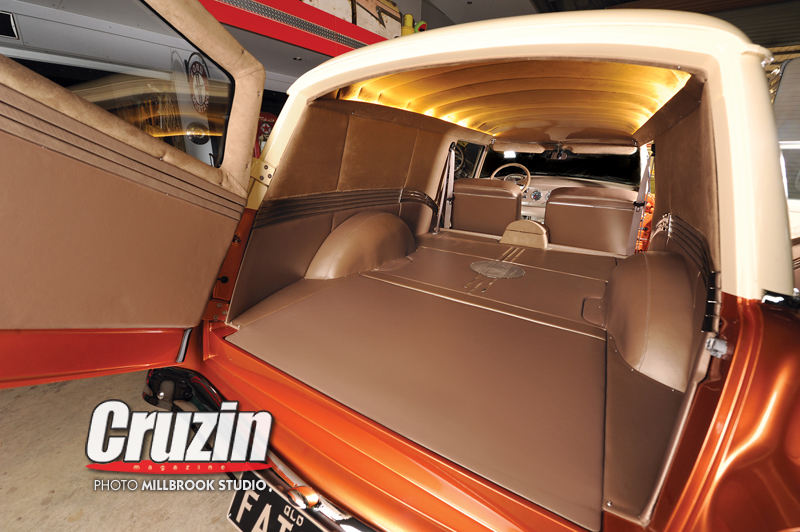 With the body prepped for paint it was up to Debra and Cassie to finalise choosing the colour chips from the House of Kolor chart, settling for a mix of Gamma Gold with Candy Tangerine. A custom blend of cream was then added to the humongous roof. Icing on the tasty combination is the SCP graphic supplied by SS Signs and Vehicle Wraps.

Back inside the carnivorous cabin, it was over to Cassie and Steve to complete their creative concepts to a standard that they would be proud of. While Steve kept himself busy fabricating a host of metal components like the under dash roll pan, console and cup holder, door trims and arm rests, rear door garnish mould and cargo embellishments, he also crafted a false floor tunnel to conceal the multitude of wiring that was routed by Steve Tomkins.

Meanwhile Cassie was stitching up a storm using a combination of Macro-suede fabric and plain and textured vinyl. Falcon XR seats covered in tones of Sea Pebble is complemented by an overhead cathedral of Stone-tinted Macro-suede with illuminated highlights. Marine carpet under foot continues the muted earthy shades of colour as does the suede painted dash. A trio of polished original instrumentation leap off the satin finish for visual appeal, that combine perfectly with the introduced features like the Flaming River column, steering wheel and Lokar shifter. Billet Specialities handles and window cranks continue the selected bling while operating power windows effortlessly. 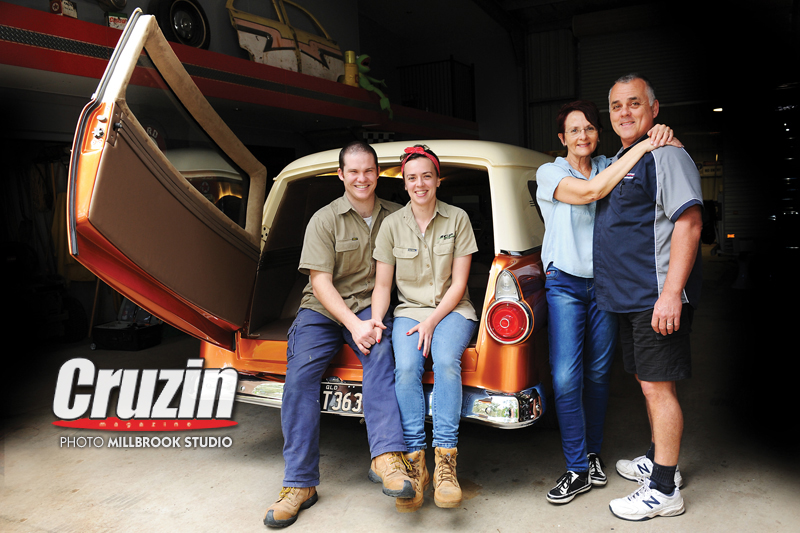 Moving rearward into the cargo area, the interior flows seamlessly from front to back, continually connected by the fabricated door flash that echoes original exterior body trim found on the sedans. Further visual and audible stimulation emits from the sunken sub-woofer and concealed sound system. Final rear compartment lifts to reveal stowage and fuel cell, eliminating any unsightly add-ons to the sanitary postal payload space.

As the build started to near completion, slowly, it was Cassie that set the bar to push for a completion date. With just over six months to go before the 2015 Queensland Hot Rod Show, it was all hands on deck to make the cut. Finishing the morning before set up, the lumpy, huge ass hippo of a car dubbed Gloria was ready. Unregistered but entering under her own power, the SCP business card and Garry’s old ’55 was up for public scrutiny. I’m happy to say that she won her class and a lot of admirers. Now Garry just wants to drive it! 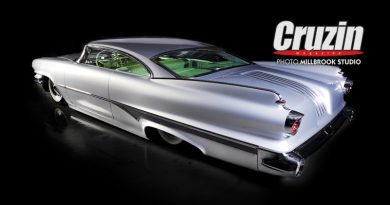 RISE OF THE PHOENIX 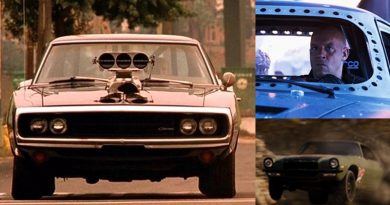 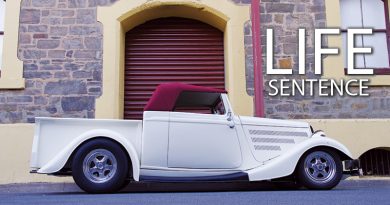