Our last visit to the Lone Star Bodyshop was way back in May 2015 when ‘The Metal Whisperer’, Stuart Smith hosted his annual open day. The affair was modest but educational, with Stuart providing metal working demos and answering questions for as long as people were asking. We were also fascinated by the eclectic range of projects in the shop, both his own and customers, and not a deuce in sight.

Stuart suspects his interest in cars was influenced by his Uncle Rob, the youngest brother on his Mother’s side.

“He lived on our farm in Helensburgh. He was a mechanic by trade and was going on tin hunts all of the time, but if it didn’t have a Ford badge on it, it didn’t have much value to him. We looked at a lot of cars that were essentially $100 per tonne,” recalls Stuart, aged 64, going on 21. “Now I just love an interesting car.”

He’s operated from his sheds at Darkes Forest, south of Sydney, since 2002, where he’s aided by his offsider simply known as Fireman Steve. Set among an orchard within the Dharawal National Park, Stuart tells us the property goes back four generations between two families.

The workshop is a seven day a week operation, the week spent working on customer projects while the weekend is reserved for his own toys, although we’d imagine the lines get blurred every so often. When he does venture out, you’ll see him in his trademark maroon Chevy pickup with a gold star on the door. He’s actually got three to choose from, including a dually, at a loss to explain the source of his affection for Chevy pickup trucks.

“Haven’t we all watched Mel Gibson in Lethal Weapon, when he pulls that house down on the beach head. At that point I said to myself that one day, I need a dually…”

Most confronting on arrival is the ’34 Dodge coupe in the doorway, and yeah, it’s got a Hemi. Stuart had only just returned from a USA trip when he was told of the coupe. He almost let it slip by, but when he discovered that it was the same wheelbase as his ’34 Dodge roadster project, he figured he could put the coupe body onto his hot rodded roadster frame for a speedy build.

Aside from replacing the floors, Stuart reckons the coupe must have been stored indoors much of its life. A nice set of stock fenders are in the rafters awaiting their day in the sun. Meanwhile the roadster fenders are on the coupe, already widened for big rubber. He’s also eliminated the dickie seat, preferring a boot instead.

The Dodge, like almost every car in the shop, runs a Jaguar front end. Stuart speaks highly of Jag conversions. “It’s a good front end, has good geometry, and you can upgrade everything,” he reasons. The exception to the rule is wide bodied International trucks that he’s had some experience with. A Jag or Holden or L300 is far too narrow, but he’s heard of wider Chrysler 300C and Ford Crown Victoria front ends being used with success.

The 354 Hemi with the Dyers supercharger is just for set up, meanwhile Stuart has some choices to make as far as the final configuration. Either way it’s been a lot of work to simply make it fit and retain the bonnet and sides. Behind is a New Process A833 four speed manual gearbox, where fourth gear is an overdrive. It’ll be a nice compromise between economical highway cruising and four speed fun.

There’s a smart looking 1954 Chevy truck in the corner, a good example of a turn key build even though it’s been on and off for some years. The body alignment on the restored cab is excellent and even though the tray and front sheet metal will be new items, they’ll still need metalwork for a quality fit and finish.

His arsenal of heavy duty fabrication equipment includes a Pullmax P3 and P5 and a vintage McPhersons cast English Wheel, which Stuart reckons he’s been offered up to $9,000 for.

“You’re always doing shrinking, so the shrinking dye stays in the P5. That’s how I made the blisters in the side of the hood. I make all my own dyes, they’re an ultra high molecular weight polyethylene. There’s a male and a female, that’s how we would make sill panels like on the Dodge over there.”

When there’s welding to be done, it’s TIG all the way. Stuart’s years of experience makes for easy passage when it comes to getting his engineer to sign off on modifications.

“It’s all about respect and trust,” he surmises calmly.

Shed 2 is the overflow, made up of incomplete and ongoing projects, diamonds in the rough and a stack of parts which all have a purpose, even if not right away.

“Most of this stuff, apart from actual cars, is resources for doing what we do. Yeah you can buy online, but then you have to wait and it’s not what you really want. This is like half of a lifetime of stuff. It looks like organised chaos and that’s probably what it is.”

We walk past another International pickup (Wow, these things are getting popular!) which is long term father and son project for a customer. It’s been going on so long, the son has grown up and is now an adult working in the military! Nonetheless, the project has been restarted with Stuart consigned with a hundred small jobs relating to brake lines, steering, tail shaft and everything else that we take for granted.

There’s another Hemi, and then another! The shiny one is destined for the Chrysler New Yorker nearby. I comment on the suitability of the coupe’s new Marine Blue paint and Stuart mentions I’m not the first.

The worked over 392 is fresh back from a rebuild, capped off with a set of alloy heads from Hemi gurus, Hot Heads. “They’re way lighter, so there should be a whole lot less weight over the front axle,” he confirms.

Stuart’s a soft spoken gent whose love of old cars stems from a deep seated interest in form and function, as opposed to guts and glory. Helping feed his habit is an importing business he runs as well, regularly shipping containers from the USA. If you’ve got something to move, he’s worth a call.

You’ll find Stuart’s operation online at www.lonestarbodyshop.com.au, or on facebook, and even on YouTube – just search under the shop name. Failing that, you can catch him on 0407 705 600.

THE ORIGINAL AHR POSTER IS BACK!

ITCHY FINGERS TO ROCK THE HOT ROD SHOW IN MELBOURNE 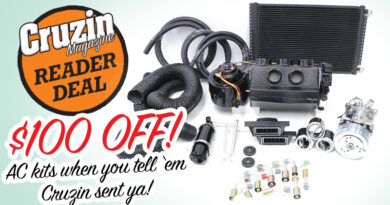 $100 OFF AC KITS AT AUSTRALIAN ROD AND CUSTOM COMPONENTS

If there’s one thing you can credit Aussie street rodders with, it’s that they love to drive their street rods!