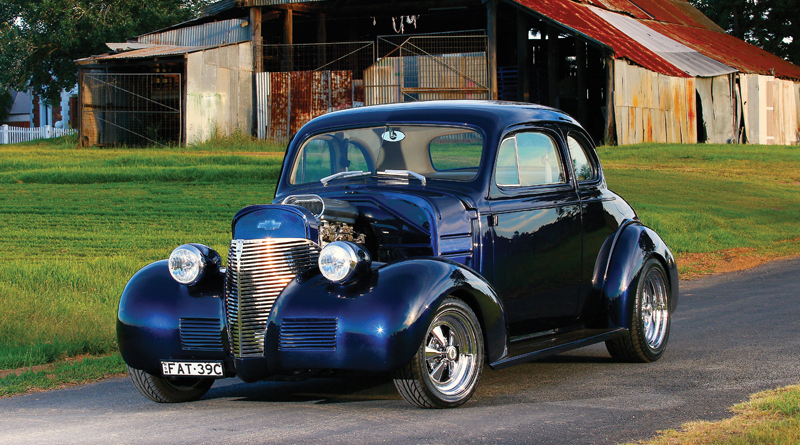 I’ll often ask our feature car owners what they got up to as youngsters and the answer is usually the same, tooling around with Aussie muscle cars until the family phase kicked in, and getting back into it again in their later years. Dave Byrnes’s tale is much the same, an infatuation with Toranas resulting in a HB as his first car and a hot 186-powered LJ soon after, much to the dismay of his parents.

“I thought it was pretty sick at the time, sage green and engine work,” says Dave of the LJ, “but after being harassed by the police so many times, I sold it. It was not the car to be in for a young guy living in Liverpool!”

For a period, Dave parted with cars, getting married and having kids before thinking about those old cars again. “I said to my wife, Margaret, that I wanted to get back into cars and I wanted a V8 LJ Torana, which is what I wanted to build when I was a kid. Along with a mate, Woody, she actually went out and found one. I was in New Zealand at the time. I came home, got off the plane, jumped into a car, drove to Orange and bought it!” 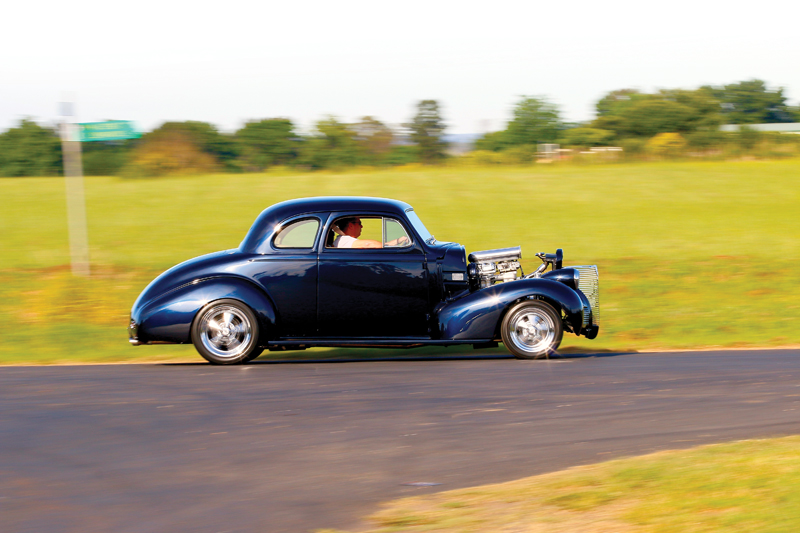 Dave was pleased with his new toy and started knocking around with some hot rod guys, stumbling across a business called Hot Rod Hire and ultimately buying it. “I was the second owner, I took the two ’34 Chevys and added a 1933 Plymouth sedan, a 1942 Chev Suburban mini bus and a stretched 1940 Cadillac LaSalle. That’s really where I got into hot rodding,” he reveals.

The problem was, as Dave admits, is that he was buying cars through everyone else’s eyes, always thinking about what appealed to the general public. After a few years, he sold the business and started looking for a hot rod that appealed to him personally.

Scouring the classifieds, he came across a 1939 Chevy coupe. The black ‘n flamed coupe had spent many years in Queensland before going to another rodder in NSW more recently, the new owner choosing to offload the coupe soon after to concentrate on another project.

While not one to chase horsepower, Dave was looking for something with a tough stance, and the all steel Chevy coupe was a bit different from the norm. Dave arranged a viewing, but admits that he’d already bought it before he left home.

“I drove it home, but I was wondering why the guy gave me a box full of tools,” recalls Dave. Half way there, he found out! “The guy had been honest, he’d told me that it had been in an accident and come off the road.” 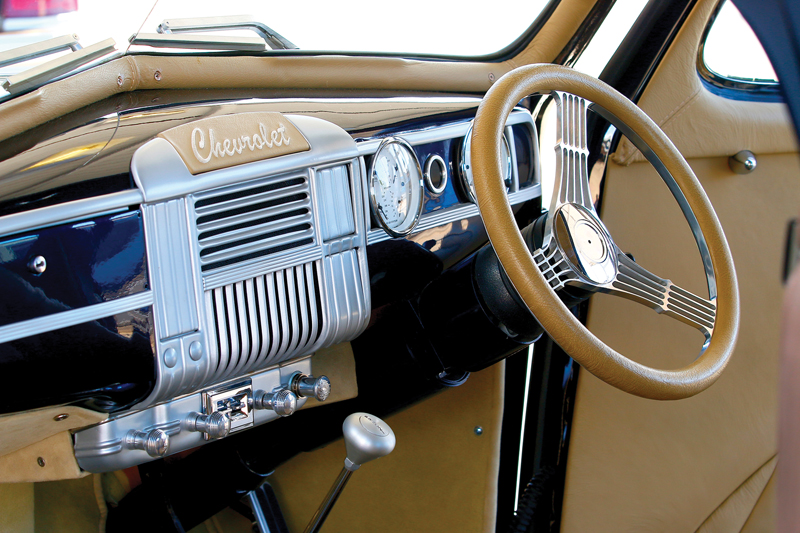 On top of some suspension damage and a buckled rim, the old coupe was simply tired, prompting Dave to make a minimal investment towards driveability.

“I swore blind to the wife that I wouldn’t be touching the car, except for the basic repairs that needed to be done. Two weeks later I was in the garage with a grinder…”

The catalyst was a run in at the traffic lights, sort of.

“I pulled up at a set of lights one day and this kid in the car next to me says, ‘Hey mister, if you drive backwards really, really quickly, will the flames go out?’ At that point, I decided I was going to do some body work and a new paint job.”

Initial mods included relocating the fuel filler from the side of the body to below the rear window, putting running boards back on the car, flaring the rear guards slightly plus making the necessary repairs on what was a pretty good body. Dave calls the colour Midnight Blue, devised from the House of Kolor range.

“Margaret and I both agreed that it had to be colour by day and black by night. Everyone was saying Cherry Black, but we went to a few car shows and realised that there were a lot of Cherry Black cars out there and I didn’t want to follow suit.” 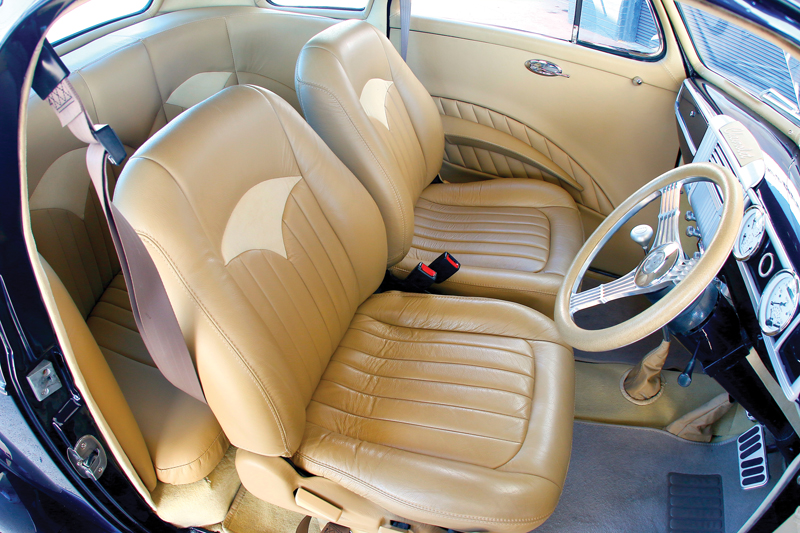 Dave feels that the colour is almost an eighties style of paint, but figured it would put their signature on the car. Unfortunately however, what you see now is the second paint job on the completed car. The Chevy got caught up in some foul play resulting in a claim to the insurance company.

“We were selling our home and I was tidying up around the house for the open day. I parked it across the road in front of a neighbour’s house, but he was going through an ugly divorce and I forgot the fact that they were throwing bricks and stuff all over his driveway. I had the car out there for an hour, when I put it away it was wet, but didn’t really think anything of it. I got up the next morning and I thought ‘What’s on the roof?’ I grabbed the chamois and wiped off paint! I couldn’t work out what was going on, the only thing I could figure is that someone’s gone past the house and thrown some paint. It’s run down into the engine bay as well, onto the rims, made a real mess. Shannons were very good, they said get the car to a panel beater, so I took it down to Gary and Glen at C US First.”

Dave had met Gary and Glen at a regular Saturday night cruise night at Harry’s Café De Wheels. During the paint repair they came up with a few more suggestions for minor body mods and improvements, so Dave chipped in to make it happen. 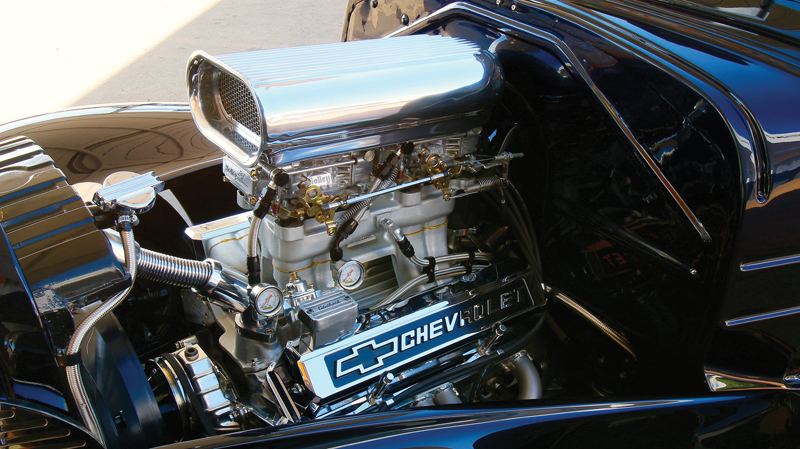 Up until now the Chevy had been running the same drive train as it did when he bought it, but Dave let things get the better of him.

“After it was painted the second time, I went home and sat down in the garage and just looked at it for about an hour. I finally got the nerve to pick up a spanner and I thought, ‘If I undo one bolt, the whole front end is coming off and the motor is coming out.’ I got that one bolt out and that was it, within an hour I had the engine out.”

The plan was to rebuild the engine into a modest Chevy stroker, but a failed crack test on the old block would see Dave in search of a fresh basis for his proposed power plant. Investing in a new GM block, Dave turned to friend, Brian Payne for assistance in piecing together the new engine.

“Brian said, ‘We’re going to build your motor, but I’m supervising and you’re building it, and if we’re going to do this you’re going to learn from it.’ I got so much out of it, it was good. You have a new appreciation for what you’ve done.”

Fortunately for Dave, Brian had recently returned from the USA with a bag full of engine bits, just what was needed for the rebuild

“I was lucky, he had enough parts there to build the motor; rockers, lifters, heads and all that, so I bought that from him. We built that motor in his garage over two days.”

For insurance, Dave handed the Turbo 350 to Marko Automatics in Penrith with instructions to trick up the box as much as possible with manualising it. There’s a 3000rpm stall convertor packed in there now as well.

“I’ve only launched it a couple of times, it goes hard,” he grins.

David has left the bonnet off the car completely, reasoning that he’s put a lot of hours into the engine bay and would much prefer to show it off. It may not have been that way however if it wasn’t for Brett Huxley.

“He’s got a very keen eye for detail. He was also a pain in the arse. He’d walk up to the car and grab a bunch of wires and just cut them, and then he’d say, ‘Now you’ve got to hide that.’ He’s a bastard, but he was right. We went from seeing each other at shows and not knowing each other, to him almost living at my house for 6-8 months while the last build was happening.” 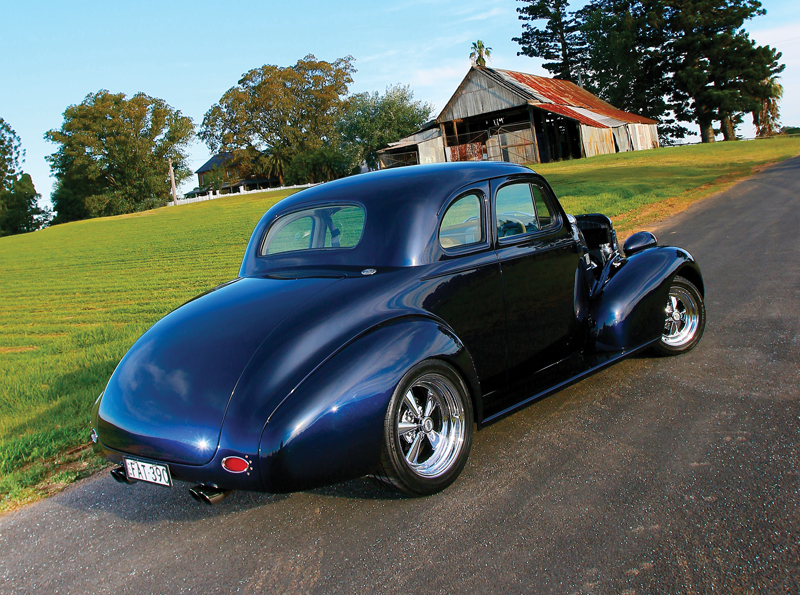 The most striking part of the interior is the dash, although only a Chevy guy would recognise that it’s an imposter.

“The dashboard is a big part of a car. The first thing people do when they look inside a car is look at the dash. I was about a year looking for something, then I got on gumtree and up comes this unknown dashboard, make an offer. So I ring the guy and he asks how much I’d be prepared to pay and I said $90. He later said ‘I’d have given it to you for $40.’ I would have given him $300! I went to pick it up that night, he took me for a long walk into this paddock and pulled it up out of the long grass. I grabbed it and skipped all the way back to the car.”

After installing a pair of Mitsubishi Mirage seats, Dave spoke to numerous motor trimmers, but the quotes he was getting were well beyond his already expanded budget. He was then directed to Brad Hearne at Dr Stitch, a trimmer who had done a lot of work on late model cars, but was keen to add some hot rods to his portfolio. They to-and-fro’d on plenty of aspects, but Dave is very happy with the end result.

“Brad wanted to add a console and big speakers, I said no way. I let him put the suede in the seats, and the armrests were also his suggestion.”

“It’s the vision I started with, now it’s about driving it and enjoying it,” David surmises, despite spending a few more dollars than he’d planned. “We set a budget for what I wanted to do to the car. I surpassed that, but Margaret did mention that she knew that would happen! I guess she’s a believer, like me, that you have to chase your dreams.” 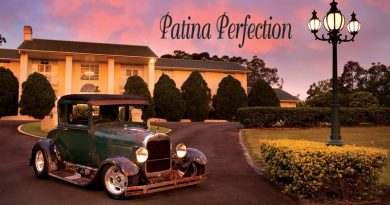